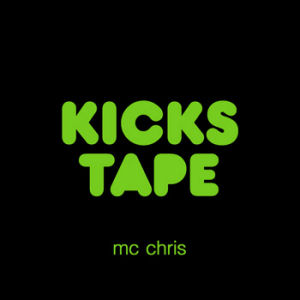 Try a search for "Kicks Tape" on Google and you might unintentionally get a story about mc chris kicking a fan out of his concert in Philadelphia. Let me help you out a little - this is a link to the free download on the mc chris website. To give you a little background though, this release originated with a Kickstarter campaign for a mc chris cartoon, which he has since shopped (so far unsuccessfully) to several venues. Backers who donated $2,500 or more were promised "a song written about you or the subject of your choosing" along with a personal phone call and other assorted goodies. While fellow indie/nerdcore rapper offered a similarly-funded album for a small fee (but also made the entry price for a custom song much lower), mc chris is giving his away entirely for free as a thank you to his loyal supporters. On his music page it's classified under "Remixes," which makes more sense when you hear the song "Thank You For Being a Fan":

Unlike the other three songs on the "Kicks Tape," this Golden Girls cover is dedicated to "all 1183 cartoon backers" who donated regardless of the amount. For the three who took the big plunge and ponied up $2,500 specific songs like "Local Heroes" are the result. This one is pretty special, as it goes out to petty officer first class Dread Johnson, stationed with the U.S. Navy overseas in Guam, a communications expert who missed his favorite comic book store Local Heroes in Norfolk, Virginia. They're sure to see an uptick in business as a result of the song, so perhaps they should give a few free comics to Dread once he comes back from his latest tour!

"Where would we be, without our local heroes?
There's where I shop when my wallet isn't zero
So many titles provided I get excited at the thought of them
Bought all of them, now I'm reading them on my ottoman"

Now it's not necessarily the easiest thing in the world to critique an EP only 4 songs in length, let alone one which was commissioned by fans who are undoubtedly thrilled with the results, LET ALONE the fact chris is notoriously less than thrilled with criticism in general (hence the fan being kicked out of his concert) even if not directed at him personally. With all of that said the songs are charming, and some are very commercially minded, such as the producers of the "Red Moon" graphic novel clearly commissioning a tribute to their own book - and a song which is therefore by nature more meaningful to anyone who has read it. Since they are reportedly thrilled by the results as noted in the lyrics (which are included for each song albeit in .gif form) we can enjoy the song and defer to their judgment.

With all that said, some inevitable truths must be offered, and much like his "Race Wars" album it involves acknowledging that his album releases tend to cater to a niche market - the "Kicks Tape" even moreso than most. His self-produced beats are a mixed bag, sometimes great and sometimes not so much, but those found here are at least par for the course. His high pitched voice, made famous to so many people for the [adult swim] characters he portrayed, can potentially be a turnoff for people who don't get his humor or relate to his nerdy pursuits. And I say this with complete respect for mc chris as an artist, but like so many rappers, singing isn't his strength. Since he is saying "thank you for being a fan" though I have to say "thank you" right back for this free download.