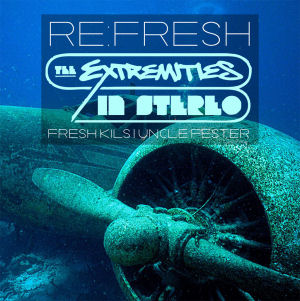 Occasionally I'm struck by the fact my interest (obsession) with Canadian hip-hop probably drives a segment of the readership insane. I can't help it though - I got in on the ground floor early with Maestro Fresh-Wes thanks to a tape trading friend in high school. The love never faded as I rolled from era to era - but what did change was that my interests became increasingly underground. It's easy enough to big up Swollen Members and Classified because they get some degree of U.S. crossover exposure, but D-Sisive and the Sweatshop Union are just as interesting with or without the buzz. Underground and indie rap heads know that, but on both sides of the border heads bump Drake and Tyga while ignoring the opportunities for deeper exploration right in front of them.

Putting aside my fondness for maple syrup, backbacon and donuts from Timmys for a minute though, lets talk about The Extremities - and no not the ones you can't reach after your gut expands from all those calories. They are more or less the resident in-house producers for Droppin' Science Productions, which besides having a name both Nas and Extra P can appreciate has a roster of talent that goes above and beyond even for this wannabe Canuck. Ghettosocks, Muneshine and Timbuktu just to name a few all call DSP their home. So needless to say I was as excited about "Re:Fresh" as I was to learn that Jay Onrait and Dan O'Toole would anchor Fox Sports 1 when it debuts. (My Canadian friends are not so happy they are leaving though.) A compilation album of their best remixes combined with Canada's best rappers = GOLD.

"Re:Fresh" did not disappoint in any way. "Cold Cheese" is a fun rap track from the jump with the "five star generals" of ELMNT, Brandon Dramatic and Roshin. The bass heavy "Like This" follows up immediately with D-Sisive, Guilty Simpson and DJ Grouch. Like so many songs D winds up on, he's a show stealer:

"Helter skelter, read all about it
Bury me six feet deep underground with a
Tek-12 and a tweaked up sound system
Watch the pavement pound 'til the ground splits and
spits up my corpse in tact
Mic cord running through soil where my Jordans land
Chillin' in my b-boy stance
Dream killin' emcees trying to eat off rap"

The original was good, but this one's better. That goes for just about everything that Fresh Kils and Uncle Fester touch here. There's plenty of cross border kinship on the songs too - "Likkle Champion" features a fat horn swagger team-up between Ain't No Love and Skyzoo. Prince Po of Organized Konfusion fame rolls with Fraction on "The Getaway." "Morning After" is a piano swanging banger with Apollo & Wordsworth.

At a set your own price option, I dare you to spend anything less than $7.99 US or Canadian on it, particularly when you learn that it comes with instrumentals for all 11 tracks. This entire album is like a trip to the Sugar Shack, and I don't feel the need to apologize for my fondness for Canadian hip-hop after this one no matter how obscure or underground. Don't fight the feeling - there's as much talent here as in the U.S., UK, Australia, or any other hotbed of hip-hop around the world. Canada's got it going on and so do The Extremities.