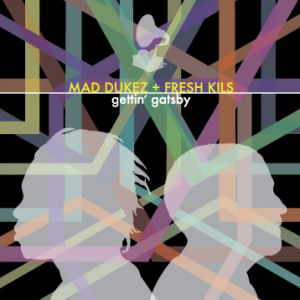 In the span of a year I've gone from meeting Mad Dukez for the first time to anticipating each and every project he drops. Presumably for the RR audience it's been the same. Dukez provides a refreshing break from the mediocrity of the mass media, where every rapper brags about how rich they get and how much P they hit. Perhaps Dukez benefits from being from Buffalo though, without the typical New York pressure to keep up with the Joneses and the Carters. He certainly benefits from his friendship with Fresh Kils, who matches him bar for bar with beat for beat.

2013's "Gettin' Gatsby" comes with an intentional wink and a smile to the rap audience. The album's title clearly capitalizes on the latest film to revisit F. Scott Fitzgerald's novel, but dig a little deeper and the novel itself could be a study in mainstream rap. The parallels aren't hard to find - from the conspicuous consumption, to the envy of the haves toward the have-nots, right down to the accepted level of violence and the casualties of gunplay. There's clearly an analogy here, right down to Uncle Fester's scratches at the end of "People Players." KRS-One runs down the roles, Phife Dawg professes a lack of shame at it all, while CL Smooth vows he's "blowin up spots for knots in the millennium." "Bootleg Bartenders" even reflects the prohibition of the roaring 20's:

"Orders ain't a problem (nope!) Gotta be kidding now
Citywide fame and the rumors have started dying down
See my choices are bigger - I'ma try 'em out
Walk up in a hanger with money and bet I'm flyin out
Ahh-ha! Get the news, no paper route
No doubt, I gotta be strategic now
I'm a little turned up but the product loud
And the smell of indiscretion floatin in the clouds"

I'll probably be quoting lines from the song at random from here on, like "your heart-burns with the envy you should take Tums." Dukez is clever without being a showboat, without having to cram multiple punchlines into a bar, without having to run way the fuck off beat just to fit in all the big words he knows. You can respect his approach for being no-nonsense while simultaneously having the necessary self-confidence and swagger to raise him above the average emcee. Even when he hangs with big dogs like Ghettosocks and Timbuktu on "Silent Stylin'" there's no question that all three are on the same plateau.

As is so often the case with a Mad Dukez release, the most significant detriment is the length. Let me be clear that I respect that he'd rather do fewer songs of higher quality - but I also find that any album under 35 minutes barely has the time to pull me into its world. Thankfully the cutting edge production of T-Dot's own Fresh Kils helps keep this movie in iMax with Dolby Surround. "Valley View" sounds like a buzzing electronic didgeridoo, "Rearview Reminder" featuring Blueprint is a PBS rainbow of hip-hop happiness, and "Decadent Dilemma" takes the little used xylophone and makes it the melody. It's hard to be bored when Kils puts in work, and since Dukez is a like-minded emcee willing to go against the grain, "Gettin' Gatsby" is another solid release. The only downside for the two is they set the bar higher each time out.