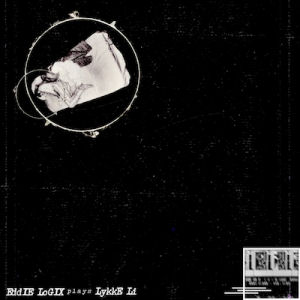 You may know Eddie Logix as one half of the Detroit-based rap group Progress Report, but the bio that precedes the release of "Lykke Li" tries to throw that out the window. In fact it's comically over the top to the point you'll either love it or find it supremely annoying when reading it. I've never heard of "cowboy stamp collector Claude Merriweather" and neither have you, and I sincerely doubt he studied for six months at the University of Ho Chi Minh City.

The upshot of this whole joke is that Eddie's greatest musical influence is alleged to be Lykke Li, a Swedish singer/songwriter who had one breakout pop hit in the U.S. - the song "I'm Good, I'm Gone" in 2008. I honestly don't remember it and watching it on YouTube before writing this review didn't jog my memory one bit. It sounds like her vocals make up the song "Deal Hard" though, either as a remix of her work or a complete audio re-interpretation. At least as a producer I can understand Eddie's motivation here, even if his bio remains largely unfathomable.

It's entirely possible all 9 songs on "Eddie Logix Plays Lykke Li" borrow from or interpolate her catalogue, but I'm going to have to unapologetically admit that I'm not going to listen to all her music to find out. The liner notes on Bandcamp don't say - they just run down his whole whacky bio again. He's also borrowing from a list of guest stars to rap on these tracks arguably more obscure to me than Lykke Li, save perhaps for MidCoast Most (another group he's a member of). Out of all of his collaborators, the only one I really latched onto is Doc Waffles - he raps like the white nerdy version of Kool Keith. As much as I'm trying to appreciate the jokes here by Eddie Logix, coming from an admitted multitude of levels that do showcase his creativity, I think deep down the only marketing necessary is "Do you like Eddie Logix as a producer?" He's certainly not garbage, and he's definitely several steps above your average bedroom producer with a MacBook and a copy of FL Studio. Songs like "Phone Number of Firsts" and "We Can Go" sound better in the headphones than they do on the stereo system or in your whip. There's not a lot of snappy drum percussion or big bass feel. Eddie Logix operates from a wide variety of influences, perhaps as many as his fictional bio claims, but I wish he had settled on George Clinton or Prince this time. I like some of his work for others, but "Lykke Li" not so much.