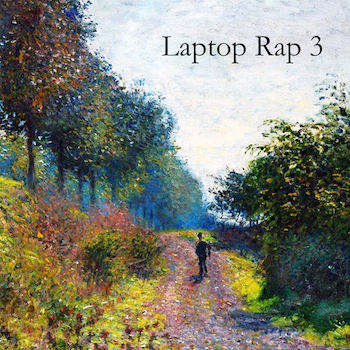 Receiving an album on a flash drive caught me by surprise, but given that Andrew JD's album is called "Laptop Rap 3" it fits his theme perfectly. If we're realistic about the music industry it makes more sense to release albums this way anyway. I listen to how my peers talk about music these days and I hear comments like "I still buy the CD because I like having something physical I can hold and look at." We've reached the point where compact discs are now what vinyl records became 20 years ago - COLLECTIBLE. Arguments about analog vs. digital and the "warmth" of sound or lack thereof are now out the window. These are antiquated notions in the iPod Age. They won't ever go away entirely - after all you can still buy vinyl - but they will seem increasingly "retro" like playing old Nintendo games on an actual Nintendo instead of via an (authorized or otherwise) emulator.

If you poke around Andrew JD's blog it's clear he's an intelligent and thoughtful young man with a lot of thoughts to share. He writes about why he raps, he writes about the brilliance of selling overpriced plain white tees (with a hint of sarcastic wit) and he takes photos of nature. It's kind of a shame he can go months at a time without updating, but it's also refreshing to know even a self-confessed "Laptop Rapper" can go long periods of time unplugged from social media. While the bonus media on his flash drive helped me find him online, you can start @MetaJD and find most of what he does from there without a hard copy. In fact you don't even need physical media to listen to "Laptop Rap 3" since you can download it from DatPiff. Even flash drives may become dinosaurs if computers go beyond eliminating CD-ROM drives and eliminate USB ports too. To embrace the potential collectability factor, JD labeled my drive "7 of 100."

"I said it on _Laptop Rap 2_
That I'm just another white dude
So don't all go and get it confused - no
Whether you've been goin through your own shit
Whether you've long been into this
This music, this culture, we not the vultures
We wakin up like Folgers!
Decaffeinated, it's all natural
Everything inside is an actual
entire realm of thought
Waiting to be heard felt and sought after"

For "Realms On Realms On Realms" JD has a Beastie Boys level of distortion to his vocals, which when combined with his noisy sampling of God Within's "Raincry (Spiritual Thirst)" makes him fairly hard to understand. Though the flash drive does come with a .pdf booklet not unlike the one you'd get as a CD insert, the album does deviate from the script here and there. That's typical of lyric inserts, since almost no one flows exactly like what they wrote on the page - you add or drop words in the moment of actually hitting record that sound better, more natural, or just keep the bars more even. Andrew always has some form of manipulation to his voice on each song. "Screaming From the Highest Mountain For God" has a metallic echo that I'm not a fan of. When he raps over Janelle Monae's "Cold War" on "New Age" the broken mic effect works. To be honest it's best when he tones it down to nothing but a slight bit of reverb on "Everything Is Going to Be Okay," which borrows from a remix of "Smile." JD's album title is both going to both attract and drive away a certain segment of the rap audience, and this fact is not lost on him in the least. On his blog he writes that the end listener is valued, but the therapeutic act of making rap music "in the 100% DIY manner I choose" is even more valuable. That gives even the quirkier or harder to listen to songs of "Laptop Rap 3" a refreshing honesty that's hard to disrespect. At the same time it's not lost on me that his album is walking the borderline of being an album of freestyles over pop culture instrumentals, something I've heard Childish Gambino do better. I'd like to see what he can do with some original beats and a producer who could tone down his vocal effects in the final mix. I both like and respect Andrew JD but can say in fairness "Laptop Rap 3" isn't for everyone. I'm interested to see what he does next.