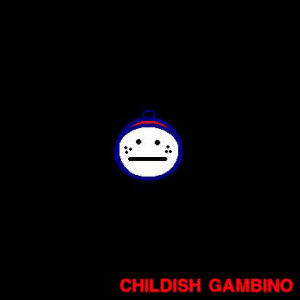 Even though Childish Gambino recently blew up with a major label album, the actor turned rapper had been dropping free mixtapes for years, dating back to "Sick Boi" in 2008. The thing is Donald Glover for whatever reason decided to literally be a SICK BOY on this first album, rapping the entire time like he had a bad cold, tissue stuffed up his nose or both. At the time I just couldn't take Gambino seriously, thinking he was mocking hip-hop and that he should probably not quit his day job as an actor and writer on NBC sitcoms. It was only on his later releases including "Camp" that I turned around on Gambino, and realized he actually takes his rapping seriously. Given that knowledge I decided "Sick Boi" is worth a second look.

Gambino: "Is it really that bad that my clothes is tight?
That I hydrate babes like Pedialyte
That I stay rock hard like a meteorite
Thought your homeboy here was an idiot right?
Welllll you thought wrong, I got flavor
I rock shows with the blue light sabre
I hit dimes but also date eighters
I make moves, blow up like Al'Qaeda"

mc chris: "I'm high pitched, might flip you diss my node
Think chris ain't the shit, you can kiss my chode
Kick your ass, sales not too early to boast
Seriously bro, hand over the security code
Because my rhymes so fresh, green grocers' gotta spray 'em
Fired all my lawyers cause I didn't wanna pay 'em
From the P.M. to the A.M. I'll slay 'em with the sawed-off
Make a little money and I'll smoke the marijuana"

Having slept on the song the first time, I didn't pass on the dopeness of "Tru Dudes" on the second listen or any of the repeated ones since. A collaboration between mc chris and Gambino is like a nerd's hip-hop dream, but sadly it would only happen one more time on "Poindexter" before the two would part ways for unknown reasons. In fact the longer Gambino has been rapping the fewer collaborations he seems to do, which I find perplexing since they're some of the best tracks for him to cut loose and have fun. You can hear the same thing when he gets down with my man Chaz Kangas on "My Hoodie."

Gambino: "Nigga I told you, my hoodie no joker
Walk up in the hoodie to a party like toga
Breathe like yoga, get off my scrotum
The color of my hoodie like a Lisa Frank folder
I'm at the Kid Robot, my wallet done shown up
They had five hoodies, but this shit done sold out
Spent too much, I know a bad habit
My hoodie look like a shit from a Trix rabbit"

Chaz Kangas: "Y'all know I'm a hoodie all pro
Find me in my hoodie like a hoodie Waldo
Rocking Amadeus like a hoodie Falco
Staying self-absorbed like I'm Frida Kahlo
From the playground, with the sports team on it
To the old folks home put some morphine on it
I rock my hoodie whether rain or shine
Overpriced in a Sam Goody frame of mind"

Other high quality collaborations on this album are not hard to find. "Assassins" rocks a famous old school 1980's break while he gets down with DC and Nick Packard. "Love Is Crazy" is a oddly romantic track over a minamlistic beat with Eugene Cordero singing the hook. The line "I'ma take you to the crib and show you the O face" cracks me up each time. Speaking of singing the hook, Amber Petty joins Gambino for one of his least nasal songs on the album, "I'm a Winner."

"He work hard for the money, but it ain't about cash
Life's a schoolyard, I ain't gettin picked last
Better think fast - there's a pop quiz
on which nigga get popped before his 25th
Y'all niggaz need to learn to live, life is awesome
Open up your own store, get a house in Boston
I know it's not easy, it takes some drive
Some niggaz get +Desperate+ like the +Housewives+
And they only see fortune, they don't see wealthy
You can lose a fortune, wealthy is healthy
You can't lose wealth, it's everywhere
The world's made of +Brewster's+ there's +Millions+ here
But if you Richard Pryor they havin the cash you get
And hard work and hopin and your faith is set
I know the world is tough I was just like you
I used to eat Lay's, now my chips is blue"

I wish I could tell you more about the production of the album, but as he was giving this away as a free download, there are no credits to speak of, except the ones he gives at the end of this song - and he just vaguely thanks "anybody who ever made a fly track, uhh, y'know, everybody." Thanks Donald, that really helps. And although the 2012 Gambino listener in me understands the 2008 Gambino a little better, that "I'm literally sick" thing he's doing with his vocals on the album REALLY does get grating after a while. It's easier to overlook on songs where he shares the vocals, not so much so on nearly five minute long solo tracks like "Baby Doll." On closer examination it's fair to say Donald Glover may have gotten his rap handle as a joke, but as an emcee he actually put some thought into his rhymes and dropped good metaphors and punchlines throughout. Since you have to rate on both delivery AND verbiage though that does fairly or not take "Sick Boi" down a couple of notches, BUT it's clear here he was off to a good start and would only get better with time.