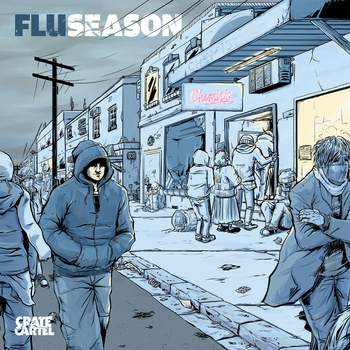 I'd love to go to Australia this time of year. It's colder than a witch's tit in Nebraska in December, with temperatures that prompt weather forecasters to offer "chill advisories" if you plan to be outdoors for even a few seconds. Meanwhile in Fluent Form's native Melbourne, they're predicting a high in the upper 70's for Tuesday and the low 90's by Wednesday. Our Aussie friends are enjoying a steamy summer right now, while it's clearly the winter of my discontent heading into Christmas.

Thankfully "Flu Season" will heat things up a little bit, and thanks to Bandcamp collaborating with his Crate Cartel label, it's also easier to acquire than previous releases. Imports are notoriously expensive, and both Amazon and iTunes seem to sleep on the notion Yanks would like to hear Australian emcees. There are no such difficulties here, which means a chance to not only enjoy Fluent's dark and brooding vocals, but that of guest stars like Mata, Must and One Sixth on "Poison."

Shoutout to Must Volkoff, who both produced the track and provides the fresh Inspectah Deck scratch from "Above the Clouds." There are other guest appearances in the 40 minutes of "Flu Season" though, such as Geko on "Arrows," which is as you'd expect - Melbourne rappers roll thick. The eye opener is the trans-oceanic collaborations that Fluent pulls in, getting One Be Lo to drop gems on "Dose of Slang" and Has-Lo to close the album out in fine form on the Geko produced track "Yesterday's Gone."

Has-Lo: "I be alone whylin out, castle on a hill
Isolated from pain, the overshield over my dome is real
Too numb to run
Two of the one; if I lose I'm doomed
was a dialogue I had, tellin my dude
how he should leave that to his passion
Reading your tomb before you're in it
Looking back at the old me
I was so deep that I'm beyond sonar's reach..."

Form does function on the track though, with ear popping lines like "you called me petty when I danced on your grave" and "brought an end to your world like Mayan astronomy." I tend to caution U.S. listeners that Australian rappers are harder to understand, but fuck that, I can more clearly understand Fluent's verbiage than 98% of what Gucci Mane has to say. If there's any downside to "Flu Season" it's that it's only 37 minutes long, which seems criminally short when you're already inoculated to his sound. Production lifts him up high, from the Geko buzz of "Vantage Point," to the Discourse pianos and scratches of "Synthetic Love," to Volkoff's underground boom bap on "A Grade." By the time this album ends, I'm ready to face the winter again. Bring on the sniffling noses and handkerchiefs - I can face both the cold weather and the common cold thanks to Fluent Form.