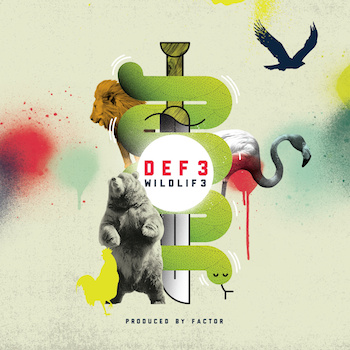 If you're a Canadian emcee looking for a shortcut to get your album covered on RapReviews, having Factor produce it is probably a good start. Unfortunately that's also probably a dead end since like any good producer there are undoubtedly far more rappers who want to work with HIM than the other way around. It's the very fact that Factor is selective about who he'll make music with that makes projects he's a part of something I'm partial toward. I know in advance that a Factor produced album is not going to be a run of the mill rap record - the emcees have to be something special (or odd) to meet with his hip-hop beats.

Def3 has therefore earned a hell of an endorsement right out of the box on "Wildlif3" just by the printing of "produced by Factor" on the cover. He didn't earn this honor lightly - he toured for the last three years with Sweatshop Union sharpening up his skills in preparation for this moment. Curiously the insert for "Wildlif3" is the one thing that didn't seem sharp - it reads more like reasons for retailers to stock his album on store shelves. I don't care that the entities behind the release of "Wildlif3" bought four weeks of advertising online, and if they did I certainly didn't see a dime of it. They mention a Twitter campaign that had "500K impressions" but I doubt that counts random URBNET press releases I chose to share on RR. I'm even willing to bet there's a good chance the opening track of this week's podcast may be your first time hearing Def3. Let it not be your last.

"You can point the finger, move it longitude and latitude
But anyone who's anyone can probably point it back at you
Confidence is attitude, and consciousness is gratitude
I'm rapping with inepitude but doing what I have to do
Haters wanna laugh at you, they jealous of your after school
activities, cause their abilities are often lacking tools
Factor, G's a natural, and Def got the vernacular..."

I had to rewind that a couple of times to make sure I heard Def's self-deprecating rhyme correctly - I was tempted to think he said "I'm rapping with an attitude" but that would have been absurd given he already used the word "attitude" in the previous line. No - Def said "rapping with INEPTITUDE" implying "lacking skill" despite the fact the song "So Far" shows a free flowing eloquence that most other rhymers lack. He throws away punchlines like they're an afterthought. Witty lines like "my shit is heard/herd like elephants" and "rock like it's an amethyst" similies spill out almost effortlessly - which of course means they're anything but. Therefore Def3 humbles himself by claiming "ineptitude" when even the most cursory glance at songs like "Under the Influence" shows he's far from unskilled.

What starts out like it might be another careless ode to drunk driving a la ScHoolboy Q's "Hands on the Wheel" turns out to be a modern day EPMD parable like "You Had Too Much to Drink" with even deadlier consequences. "I didn't even drink that much" complains Def3 to anybody listening, but nobody wants to hear it. "Another mother crying, yeah another brother's hearse/shoulda, woulda, coulda but I didn't - famous last words." It's a first person perspective of a tragedy that could have been prevented, which makes it a far more effective PSA than anything MADD ever came up with - it's effective because it's NOT a lecture.

An obviously excellent rapper like Def3 has no problem coming up with collaborators other than the producer Factor - and you'll find them time and again throughout "Wildlif3." Ceschi Ramos drops in on the twisting grooves of "Satellite," Moka Only and Panther join the fray on "Live It Up" and the boom bap thump of "Where Did We Go Wrong" is well met by Evil Ebenezer and Merkules. There are more partners in rhyming or singing that join in on the (unfortunately) short 37 minutes of "Wildlif3," but not enough to disguise the fact that this is Def's project or that he is a clear star of hip-hop whose unique upbringing (six years of his childhood aboard a traveling hospital ship) gave him a unique worldview that's worth sharing AND hearing.