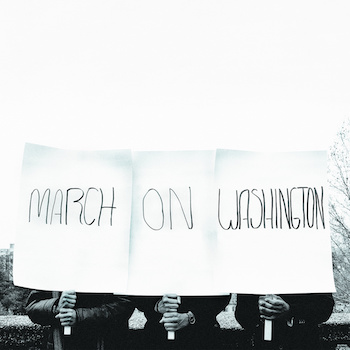 It took five years to release a follow-up "In the Ruff," but it's fair to say Diamond District is worth the wait. The Washington, D.C. trio of rappers X.O. and yU plus rapper/producer Oddisee proved irresistable - especially given their last album was given away FREE. RR writer Patrick Taylor was suspicious at first, noting that anything free has a catch (like "the couch you get on the street [that] has a funny smell you can't get rid of"), but warmed up to the well written vocals and hype beats. Once in a while the best things in life ARE free after all.

This time around though be prepared to fork out $8.99 or more for a copy. It was incredibly (possibly overly) generous to give away music that good for nothing, but I've got another metaphor for you that Patrick didn't use in his last review: "The first taste is free - after that come and see me." Yes I'm comparing Diamond District to narcotics, but see if you don't agree when you listen to tracks like the whimsical "Working Weekends," complete with lines like "This elbow you receivin' is brought to you by Hasbro, asshole with a afro." Peep it for yourself:

The rest of this review is going to sound incredibly favorable - but I'll clarify before we go any further by saying that Run the Jewels is still my favorite album of the last three months - maybe longer. This is really damn good though. Some producers just have a natural gift for knowing what sounds right, but not just in terms of making a hot beat - it's knowing what beat is hot at the right TIME. It may be something in the water, but Oddisee is naturally in tune with his fellow Washingtonians. The airy piano keys and lightly tapped drums of "Apart of It All" are so well mixed with the rhymes you may find yourself unconsciously drifting in enjoyment, hitting repeat over and over without having intended to do it. This is not an isolated example - it happens over and over again while you're enjoying an hour's journey through the District's beats and rhymes. "You Had to Be There" references a line from A Tribe Called Quest's "Oh My God" and it's fitting - there's a very Native like vibe to the smooth mixture of jazz and hip-hop that Oddisee provides, and the trio meld into it like hot butter on what say what the popcorn! At some point it's actually frustrating to try and single out individual tracks to compliment because they're ALL good. The humorous and harmonized "These Bammas," the epic and aptly titled seven minute plus "Ain't Over," even the MF DOOM-esque "Bonus Flow (Bonus Track)" are all that and a bag of (insert your favorite snack here). I think it's easier to say I didn't find anything I didn't like, which means that while a free album was good enough to get 8.5 across the board, they actually justified making you pay for "March on Washington" by taking things UP a notch. It's safe to say this will be the best thing to come out of D.C. this election season.