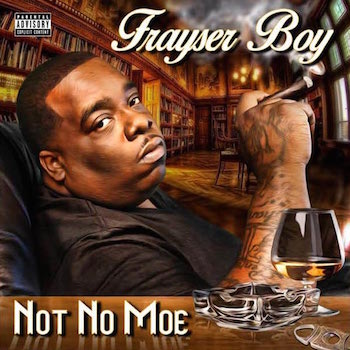 How many rappers can you name that have won an Academy Award (a/k/a Oscar) off the top of your head? It's a short list so it won't take you long if you know them all: Marshall Mathers (Eminem) for "Lose Yourself" and the trio of Paul Beauregard (DJ Paul), Jordan Michael Houston (Juicy J) and Cedric Coleman (Frayser Boy) for "It's Hard Out Here For a Pimp." The first two are better known as Three 6 Mafia, and the latter was a friend slash labelmate signed to their Hypnotize Minds imprint.

Even though these Memphis rappers wrote the song for the movie Hustle & Flow they didn't perform it IN the film - that honor went to Terrence Howard and Taraji P. Henson. The Oscar recognized the composers though, not the performers, and in a fitting twist of fate Three 6 Mafia wound up getting to perform it at the 78th Annual Academy Awards ANYWAY. Henson (who played Shug in the film) still sang the hook, but the actual rap duties went to the authors. To make it onto broadcast television a few of the song's lines were toned down.

You would think after the success of the movie, the soundtrack and the Oscar award winning song that Frayser Boy would be incredible in demand as would the Mafia, and it wasn't long after that song that FB released the album "Me Being Me." The Mafia's profile continued to rise, as Paul and J became the focal point of the group's releases going forward - somewhat to the detriment and dissatisfaction of original members of the crew. (For more on that story check out Matt Jost's review of Da Mafia 6ix - reuniting almost all of the crew 8 years later.) Frayser's profile did not rise nearly as much as his fellow composers. Seeking better opportunities, Coleman's final album for Hypnotize Minds was in 2008.

It's probably not surprising that Coleman wound up with Phixieous Entertainment, the imprint that seems to host any rapper who is loosely affiliated with the Mafia or formerly part of the Hypnotize Minds camp. It would be overstating it to say there's bad blood or any kind of rivalry, and in fact artists like Lil Wyte go out of their way to state their love and affection for the Mafia on their albums. It is what it is though - Hypnotize Minds and/or the visionaries behind it weren't serving their interests and garnering them the success Paul and J enjoyed - so they moved on. Consequently you don't see a lot of cameos from the Mafia on their albums lyrically or production-wise - a shoutout or an interlude maybe and that's about it. Let me reiterate to be perfectly clear - there's no STATED beef. It's like everybody just said "We all cool, but we're going to do our own thing."

Frayser Boy is doing that thing again after a long time away, and he makes up for lost time by turning in 15 tracks spread out over 50 minutes on "Not No Moe." Tracks focus heavily on the thump and are guaranteed to give the bass cones on any speaker you play them with a workout - I'd personally start with "I Don't Know." If you see anything melt or smell any smoke, that means your system wasn't hard enough for what Frayser Boy and his producer iLL Kronik are bringing. Time for an upgrade.

The usual suspects who are somewhere between part of the Mafia and not part of it make cameos - but there are also unexpected surprises like Orange Mound legend 8 Ball appearing on the song "Dumb on Down." I won't lie - I was hoping at first that it was a rare Southern song that actually questioned getting screwed up on medication(s) - but it's actually advocating getting "dumb on drank" along with anything else that can be ingested or smoked. Oh well. Might as well just get hypnotized by the Shawn Mattison beat and the slow drawl of 8's flow and enjoy the tag team duo. In fact that's the general attitude you should adopt for Frayser Boy. This shouldn't come as a surprise if you're a fan of Mafia rappers or their associates - the sound, the swag, and the style have normally taken precedence over saying anything profound. "I be hard on these niggaz, but I'm harder on a b#%@h/they some sneaky mu'f#%!ers - I ain't goin for that s@%#" is about as deep as Mr. Coleman gets on the iBeatz laced "No Stress." Why stress about it? If you're looking for incredible punchlines, illumaniti conspiracy theories, fiery rhetoric or angry diss songs fueled by a desire for retribution, you'll find little of any of that. Even songs that seem angry in print like "Same Ones" featuring La Chat are delivered in a relatively calm straightforward manner. It actually makes Frayser Boy more appealing to be this cool about his steelo. You get the feeling he's satisfied - knowing that he "Came From Nuthin" but still succeeded way more than he could have imagined.

"It ain't no limit to the paper that I spend now
Acelebration now, yeah these niggaz hatin now
They used to doubt me now I hear congratulations now
It feel good when you come up from the mud"

No doubt that it does. Cedric Coleman's not going to revolutionize the rap world or change hip-hop as we know it on "Not No Moe" - he's just making his kind of music for his fans. It's slow and low, it's deep and hard hitting, it's some real talk delivered with the utmost amount of chill. It's not hard to enjoy.