Grand Lodge 3 :: Nothing to See Here 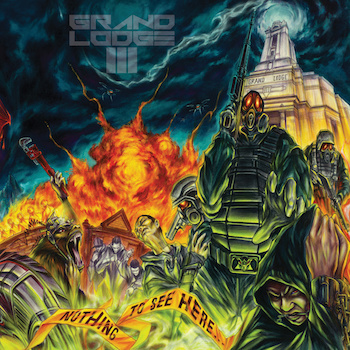 Grand Lodge 3 is the newest iteration of a rap supergroup, this time made up entirely of Australian artists - Ciecmate, Dazastah and Mortar. Ciecmate is a dual-threat artist who both raps and produces, but this time Dazastah takes the over the beat making role, leaving Ciec and Mortar to take the lead - though D has a notable appearance on the Australian all-star rap track "12 Monkeys." It's an over seven minute long track, with the obligatory Jeffrey Goines sample to open, and a slew of names familiar to RR readers like Newsense and Tornts who follow - but for my money it might be the previously unknown Layla who steals the show.

There's an overarching theme of government/corporate/Illuminati conspiracy to this song and to "Nothing to See Here," one which listeners of Non Phixion or Vinnie Paz would be comfortably familiar with. To avoid becoming too heavy there's humor interjected throughout, which can be seen on the album's title track "Nothing to See Here," which samples from Frank Drebin (played by Leslie Nielsen) while he's handling crowd control in one of the many absurdly surreal scenes of "The Naked Gun." Were it not for this kind of levity, the sheer weight of what their press release calls "the unseen war for your mind - the information war" might be too much to process. One other thing you'll quickly glean about "Nothing to See Here" is that it's not a coincidence the album's title is a pop culture reference. Time after time, song after song, there's something you're familiar with in the name. "Falling Skies" doesn't borrow from the TV show it's named after - rather the samples are vocalized snippets of William Cooper's "Behold a Pale Horse" - but it certainly implies that we're part of a grand alien conspiracy. Likewise "Cyberdine" doesn't sample from any of the "Terminator" films, but the dial-up sounds and lyrical topics suggest we're living in a Matrix-esque world and that Grand Lodge 3 are the only ones to hack their way out of it. Some references are potentially accidental, such as "Proximity Effect," as I find it highly unlikely that it was inspired by a comic book from 2004 that only lasted a few issues. As much as I want to enjoy songs like "Inception" and "Grave Mistake" it's the grave nature of the aptly named Dazastah's beats that hold this album down for me, figuratively and literally. It's heavy. I would have actually preferred Ciecmate's production, which are at times on the bleak and dark side itself - but as writer Jesal Padania once opined - they're also "banging" and "incredible."

There's plenty of technical competence in GL3's mixing of instrumentals and vocals, the inter-weaving of samples (such as Optimus Prime's dialogue in the aforementioned "Grave Mistake") but it's just grimy without being grand. The dystopian themes of Deltron 3030 or Non Phixion seem to soar over their sonic backdrops, transporting you to a science fiction apocalypse, while "Nothing to See Here" is (time to use my own science fiction reference) more like "Elysium" - you're trapped on the ground while a seperate world of beauty lies out of reach. I kept waiting for an epic track that would rise above, but only a few select songs like "Looking Into My Mind" break the chains and truly rise to greatness.