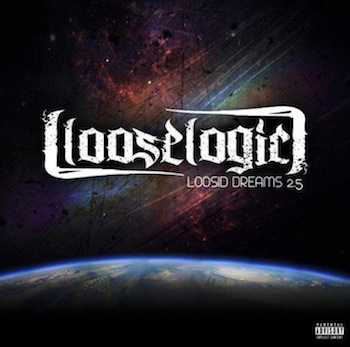 Not that long ago and in a galaxy relatively close by, Loose Logic dropped "Perception" and I spent a cold winter's night trying to decide which part of sunny California the "Southland" rapper hailed from. It's not that much clearer now than it was a few months ago, though his bio now notes that he got his first nomination for an award when he recorded "The O.C. Anthem." That's not a reference to the angsty teen drama but to the place it's named after - Orange County. That seems like it might narrow things down but it actually doesn't, given more people live in the O.C. than in 21 out of 50 states of the U.S.

The one thing we can say for certain is that Loose Logic hails from a place where "population density" isn't just a reason to complain about the gridlock - it's a place where being the cream of the rap crop isn't going to come easy. It's created a hard edge to Logic's bars, made him a little combative and aggressive, simply in an effort to stand out from so many of his peers. That comes out loud and clear on "Are You Serious?" as he questions why some of those same competitors even bothered in the first place.

"Most rappers nowaday don't make me press rewind
Is it hatin, if I say they lyrics suck but respect they grind?
Man y'all should be PISSED every time a check gets signed
That's like smilin at your dealer, when he shorts your supply
or gives you a sack full of stems with some shake inside
Then lookin back, and givin dap, while he gets paid and rides
Y'all f#@%ing kill me! Are you serious son?
Is that really something you think you should be cheering him for?
Cause if it's fake s#%! that you're f#%@ing here to endorse
then I'm a killer, a gangster plus appeared in a porn
Maybe I'll blow up now!"

Loose Logic doesn't have the gruff voice of Freddie Foxxx but he definitely has a level of anger he'd recognize. If I have to compare his sound to anybody though it's to "rip rock" hip-hop California artists like the Kottonmouth Kings, though without their obsession about walking around in (self-made) clouds of smoke. It's not a bad style to have though, as it suits Logic well on the frantic "Automatic" featuring Cryptic Wisdom, as well as on the testosterone enhanced "Stay Schemin'" featuring CEO. His other closest point of comparison is Slaine, and you may catch deja vu and think that's who you're listening to on songs like "Catfish" were it not for his lack of Massachusetts accent.

Logic's latest offering "Loosid Dreams 2.5" flies by at under 40 minutes but keeps you locked in for the entire session. His adrenaline level stays pretty high throughout, making song titles like "Never Grow Up" deceptive, as instead of being a lighthearted track about fun times it's a loud rant about people who are "lazy, psycho, dirty, stupid" and "outright useless" in their life. Before Loose Logic came along I would have perceived Orange County as being a pretty laid back and chill place, but perception is obviously not reality, and the longer I listen to Logic the more cranked up he seems to get. Maybe by "4.0" he's actually going to sound like Freddie Foxxx meets Vinnie Paz.