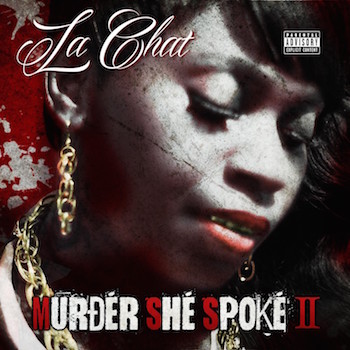 It's always possible that a first time reader has stumbled across RapReviews, and that this review of "Murder She Spoke II" is also their first exposure to La Chat. To that reader I'd like to say (1.) thank you for checking us out and I hope you enjoy your stay and (2.) it's not practical to explain the background of an artist every single time we do a review. It would be like having the first five pages of every Batman comic having to explain Bruce Wayne's tragic childhood to you. That would be fantastic for new readers, but for those who have been following the whole story faithfully every single week that would be incredibly tedious.

Fortunately comic book writers are allowed to assume that that they only need to tell the origin story once - either once a series launches or when it RELAUNCHES, and then periodically drop hints as to the origin story when specific events occur that reference it. I'm going to do the same thing for La Chat's "Murder She Spoke II" and refer you to both 2008's "Da Hood Home Girl" and 2014's "Witch" with Gangsta Boo as "relaunch" moments you can go back if you need background on the story so far. For everyone else I'm going to let it suffice to say that La Chat has nearly a decade and a half of rap experience under her belt, and has consistently been one of the most hardcore gangsterish women in hip-hop for that whole run.

There's a level of respect that automatically comes from me for anybody who stays in the music industry for over a decade, especially when it's often an incredibly tedious slog for artists who aren't pulling in that Kendrick Lamar of money and fame. It's not glamorous to be a rap artist on the independent grind - having to record each new album, market yourself all over again to skeptical consumers, play small clubs across the country selling enough merch to cover gas, doing every interview and radio appearance you can hoping to make one more fan. It's not sipping champagne by the pool with your feet up - it's HARD WORK and just as much of a 9 to 5 job as any other.

La Chat deserves every dollar she's made and/or saved, and I hope she's banked enough to make a better life for herself and her family, regardless of how much of a struggle it has been. She will undoubtedly make some more on "Murder She Spoke II." It's an hour worth of music of exactly the type her fans have come to expect, some hardcore Memphis swagger gangster rap, and she's working with the people who bring out her best. DJ Paul even proves the Mafia ties still run deep by producing one of the album's hardest hitting tracks in "You a Sanga," but there are plenty of other trunk rattlers. I recommend DJ Squeeky's "Motivation" and "Old Me" for that pure boom, tStoner's electronic funk on "Memphis Bitch" and stripped down swang on "Fake Smiles," and Big Boi's hypnotic grooves on "Thuggin" and "You Don't Hear Me" featuring Lil Wyte. I don't know if it's THIS BIG BOI, but it just might be. Regrettably for the last paragraph I must be blunt and to the point when I tell you this important fact - as much as I like La Chat and respect her hustle there's a limited amount of praise I can offer her rap style and flow. She uses the word "ho" as much or more than Too $hort, and her sophistication never exceeds the heights of rhyming "Manischewitz" with "get it" and "slippin" with "Scottie Pippen." It's not that she is bad at the technical execution of a rap flow - she stays on beat, has a charismatic delivery, and never runs out of breath. It's the verbiage that suffers in a La Chat rap - it always has been and seemingly always will be at the basic levels of rap writing. La Chat's sheer chutzpah enables her to exceeds those limitations and deliver a compelling song here and there, but over the course of an hour it's hard not to notice a lot of one syllable rhyming words and a lack of intricate wordplay. This is hard for me to say given I really like La Chat - on a personal level I respect how hard she works and the fact she never gives up - and I will happily give my hard earned money to see her in concert and buy a t-shirt. At the end of the day I can't recommend her as an all-time great. She has succeeded far beyond many of her peers simply by her tenacity, and she gets all the respect a veteran of her stature deserves, but be fair warned that La Chat's rap style works best when consumed in small doses at a time.