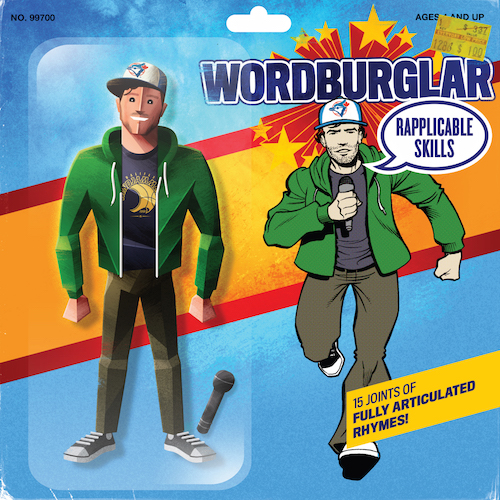 The latest evidence to me of how fast time flies past is that our first Wordburglar review is almost a decade old. That first write-up had some harsh evaluations like "too wacky to be written off, but far too redundant to really be taken seriously." Thankfully Wordburglar didn't take it personally and immediately retire from the rap game. It was a while before we got back around to reviewing Word again but "3rdburglar" showed noticeable growth and improvement, and the underground free download "Welcome to Cobra Island" may go down as hip-hop's greatest tribute to G.I. Joe - right now nobody else has even come close.

If there's both a gift and a curse to Wordburglar's style it's that it's intensely punchline driven, to the point that even his samples and the scratches are often the completion of a joke. On top of that some of his jokes are completely obscure to an audience in the 48 continguous and two non-continguous ones due to him being proudly Canadian and hailing from Hailfax.

"I put you out of work, like actors in Saskatchewan...
after Corner Gas was gone!"

If it weren't for the fact I have been reviewing Canadian rap for a couple of albums and do a MMA podcast with a friend from Ottawa, that would have gone right over my head. That doesn't mean "Word Currency" isn't a good song - in fact it's a fun track with a Beatmason instrumental and some great samples of the gruff voiced Nine (from the song "Uncivilized") to make it complete. Besides not all of his jokes are obscure Canadian pop culture references. "Hard to believe - like Eminem's a nice family man" tickled my funny bone, as did "Wordburglar - the rap Brodie from Mallrats."

Punchlines wouldn't be worth their salt if it weren't for the ability to deliver them, and the fact that Word has a pleasant vocal pitch that's somewhere between MC Lars and DJ Quik (try picturing that group for a minute). If you don't like the vocal tone I can't help you, but if you do you're going to be hard pressed not to bop your head to tracks like "Boombaparang" - if you're not too busy laughing at the snaps first. "You can't ignore the facts, like Rob Ford on crack/I get you high for less, Nordstrom Rack."

I'm probably going to use "I don't give a hoot - like dead owls" on one of my friends at some point. (Don't worry Word - I'll give you credit.) Extra props to DJ Irate for scratching in KRS-One's "Return of the Boom Bap" on the track. Actually he does a lot of damn good cutting on this album, to the point he's the Premiere to a Word Guru (my own bad punchline). Irate turns a famous Nas line flipped into a video game tribute on "Narc Hi-Score," he turns a single Kool Keith moment from Ultramagnetic's "Raise It Up" into a hook on the massive posse cut "Warp Formula" (even Mega Ran drops in on it), and on "Sentenced to Phrase" he even flips a J-Live line from "Watch Sun Watch." It's not just the diversity of sources that Irate uses - it's the fact that each one feels like a tribute to hip-hop executed with precision. Word just steals the show with his jokes though! "I'll take U out, like the American spelling of color." "Sgt. Slaughter - my name is my job description! I'm not quittin my position like a mob physician." Most of the album is Wordburglar and Irate doing what they do best on their own, though a few guests find their way into the mix, including MC Frontalot on "Noggin Users" and Ghettosocks on "Walkmen." More Or Les also scratches in the cuts on a couple of tracks including "Je Ne Care Pas" and "The Whole Spit and Caboodle." If I can find a downside to "Rapplicable Skills" it might simply be punchline overkill, to the point that even 47 minutes starts to feel a little long. There's no doubt he's clever but when his songs are at least partially topical (such as "Narc Hi-Score") and not just an excuse for him to unleash the humour (there bro - I included the U for ya) in his mind that's when Wordburglar shows what he's truly capable of. That's why "Channel Halifax" (with cuts by Uncle Fes) is a fitting way for Word to end "Rapplicable Skills." Music Vibes: 7 of 10 Lyric Vibes: 7.5 of 10 TOTAL Vibes: 7 of 10