Ayar :: Off the Corner :: Ayar
as reviewed by Steve 'Flash' Juon 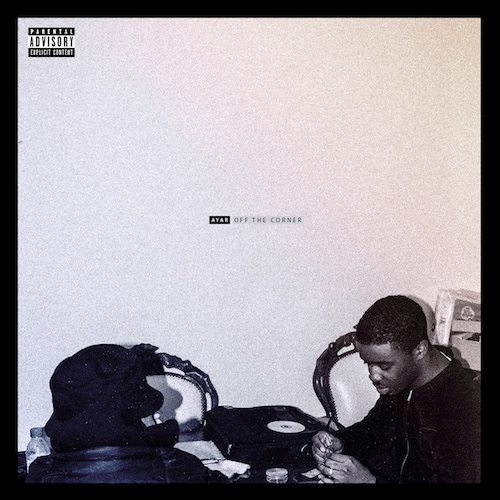 Now that RapReviews' UK Month is officially underway, let me introduce you to Ayar. He's an East London product and recent arrival on the UK scene, having achieved his first notoriety with a well received "Authentape," paving the way for him to release his third album "Off the Corner." It's his first to be covered by us, so that either shows that he's been bubbling up from the underground for a while, or that RR needs to have a UK month more often than once every November. (If you think so too you can always send us some feedback.)

Ayar's press sheet says this is his most personal album to date, featuring limited cameos from his friends Mover and Rageouz of the one50 clique, putting him in the spotlight the rest of the time. It certainly feels that way on the Sango produced "Getting Right," which has a throwback 1970's feel at the start that suddenly shifts to 9th Wonder territory once the drums come in. The samples between verses touch on racist attitudes that may make listeners uncomfortable, but which quickly illustrate that the struggles of the young black man/woman are the same no matter what city or country of origin he might be from.

The Medasin laced "Pastry" has more of a mid-1990's Jay-Z feel, like a Ski or a Clark Kent joint, and Ayar makes the most of the light and airy instrumental. The British vowel shift is certainly present, but Ayar has less of that Brixton-to-Jamaica style than some of his contemporaries. You could mistake him for an East coast by way of South Carolina lyricist if you had a few sips of the sizzurp before playing his track. As you might expect "Pastry" is a metaphor for making money on the hustle, but one that's delivered with panache.

"Mindin my own, that's intentional not BS - still
Minding your own well they commend you for some BS real
Situations, I know some wouldn't understand it
Still the face in the connect, boy pay attention when you see it"

Speaking of universal themes, Ayar's bars on "On&On (One in a Million)" reflect dreams unfulfilled, though when he says "should have been a footballer" he's not talking about the American sport with the oblong pigskin. He's clearly an Aaliyah fan by the song and another track called "Rocc (Rock the Boat Jelani Remix)," which is either surprising given her tragic death well over a decade ago or a testament to her enduring popularity. It also reflects the fact this is a "mixtape" as such, which features the kind of experiments that couldn't be done in an environment where licensing and sample clearance would put it completely out of the budget. A lot of Ayar's tracks are on the shorter side, which means just when you get into the mood and groove of tracks like the Elcko produced "Eastern Sliding" and the Derrick Thomas Jr. laced "Scripted" things come to an abrupt end. I will consider it a mark of Ayar's skill with the flow that I don't consider it a deficit, plus a mark of whoever mastered the album that they put his vocals to the forefront and didn't let him get lost in the beat. The topics don't stray too far from familiar refrains of the commercial rapper - making money, flirting with honies, getting into or out of drama, but Ayar has a flair that makes me hang on his accented syllables. "You know if there's an issue stay addressin it to me" vows Ayar, and I have to agree - he's a future prospect to be taken seriously and addressed as a man of respect.