J-Toth From Hoth :: Death of the Empire :: The Frozen Food Section
as reviewed by Steve 'Flash' Juon 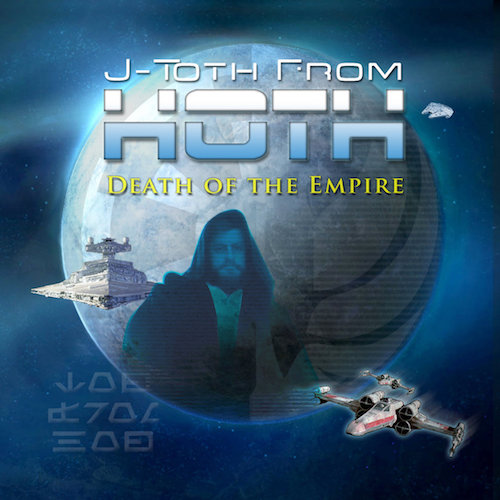 Moving away from his conspiracy theory discussion for a little bit, J-Toth From Hoth gets back to the science fiction referenced in his name (the ice planet Hoth) at a very timely juncture. The recent release of "The Force Awakens" has broken box office records and rekindled a dormant passion among Star Wars fans for a series of movies that began when I was just barely out of diapers. Though the original trilogy that gave us Hoth was the shiznit, the prequel trio that came after it was successful in theaters yet often felt like a bitter pill to swallow. Although "The Force Awakens" isn't unflawed, it has engendered good feelings and even optimism about the sequels to come, something that couldn't be said about "Episode I."

Songs like "Community (Critical Mass Comm)" on "Death of the Empire" contain the whimsical references to Star Wars canon that you'd expect from an album inspired and informed by it such as "Party on Darth, party on 3PO" and accompanying sound effects to support it. It doesn't take you long to read between the lines though and see that there's more than a little bit of the anti-government anti-authority rapper we know so well on these tracks. "Community" breaks down the idealistic community of his Hothian protagonist as "a figment of the right's ego" and points out that when you disrupt the social order, you end up like a Storm Trooper sent back to brainwashing school for "finishing."

"They donŐt have the time
Maintaining paychecks keeps 'em in line
Step out, and get sent to hardening school
for not being able to follow their arbitrary rules
You've become a problematic stat
Problem with that, seems we're never good in math
The prison state keeps you out of their path
but educate? Meglos ain't got time for that
Who takes care of us? Community
If there's beef who squares it up? Community
What if the rebels attack? Fair enough But what if they're mad at our government, and not us?
We're fellow Hothians aren't we?
How could you ever kill another Hothling?
Oh, he was resisting directions?
Really? And lots of other questions..."

The Ace Ha produced album has the right level of boom bap and space opera, and the refrain "If the civil does not act right, why should the right act civil?" gets repeated throughout the album to enforce the fact it's a new world order of the First Order. Toth changes characters throughout the album, at one point morphing into a redneck space greaser called "Abe Tha Babe" whose lack of morals seems to fit perfectly into the dark side philosophy. He seems to be working for Lord Vader himself, because the song's title ("Apology Accepted") is also the lone thing he's willing to say to his unwitting assassin for hire. The charm of "Death of the Empire" is that even though a lot of the characters being portrayed have no redeeming qualities -- and the parenthesis on songs like "SOP (Amoral Strategy)" make that clear -- the underlying value structure of J-Toth remains crystal clear. He's rapping about bad people doing terrible things but he's also rapping about good people being imprisoned by bad people for trying to do the RIGHT thing on songs like "Hey Dad" featuring LoLo Frees.

"They put me in a beautiful prison
Just because we have a difference of opinion
And so far, they don't respect our religion
But pretty soon, they're gonna have listen
to my tales, OF the wrong
And if I can be jailed for doing NOTHing wrong
cause I unveiled, they're doing SOMEthing wrong
Well clearly, they're in the F#%#ING wrong"

All of this is buttressed by samples from the various Star Wars films like "Only a Sith deals in absolutes." It's hard not to get swept up in the story, and even when familiar samples like Keith Mansfield's "Funky Fanfare" creep up on songs like "Court (Prosecution vs. Defense)" they just go along with the whole flow. "Flow" is important to speak of when speaking of J-Toth though. He's definitely a rapper and he's definitely rapping, but at times he delivers his dialogue more like spoken word poetry, and he has a smoky and gritty vocal tone that much like his delivery only suits him and nobody else. If every emcee rapped like J-Toth it wouldn't be charming, but for Toth it works precisely because he doesn't sound like anybody else, for the same reason mc chris is the only rapper who ever could (or should) sound like him. One thing though - as much as I enjoy J-Toth he should NEVER EVER SING and "Why Not Get Along" exemplifies why. Other than that miscue "Death of the Empire" works on multiple levels, from being a not-so-subtle condemnation of government and big business, to being a loving tribute to the expansive Star Wars universe of films, novels, comic books and cartoons. I'm not sure where "Death of the Empire" would fit in that canon but I think any Star Wars fan could appreciate this hip-hop as being a form of "fan fiction" that has original characters true to the galaxy it inhabits.