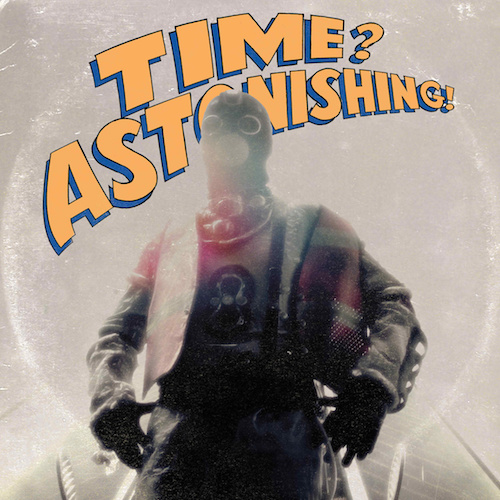 At the outset this is everything that I've asked for. I've noted many times in Kool Keith reviews that he can only achieve his deliciously twisted vision of hip-hop best when he has a capable co-pilot to steer him in the right direction musically. Based on his previous albums L'Orange is just such a man. If he's paired with mediocre talent he makes them sound good, and if he's paired with competent to above average rappers the results are indeed pleasing. If there's one thing you can say for certain about Keith Thornton, whether you're a fan or not, "mediocre" has never applied to his style. He's either brilliant or awful but almost never comes off boring.

Conceptually this album is presented as an exercise in time travel. Much like Doctor Who the protagonist is bored with the ponderous society he lives in, and takes off in a stolen time machine in search of adventure without purpose - although the Doctor eventually discovered HIS was to meddle in the affairs of the societies he wanders into. Through his adventures he changes himself, the lives of those who travel with him, and the very future of existence as we know it. "The Wanderer" as I shall call our protagonist here discovers no higher calling from his travels, changes no one but himself, and is ultimately deemed by society to be completely insane - exactly the kind of role Keith relishes throwing himself into. The crazier people think he is the more comfortable he is in his own skin.

At the midway point of "Time? Astonishing!" our hero/villain The Wanderer has found himself in a hospital bed, apparently under military watch, where he is described in a contradictory manner as being both in a "comatose state" and "waking periodically .. obviously hallucinating." That has to be the most incompetent nurse, doctor or soldier ever - whatever he is he doesn't know what the word "comatose" means. What happens next is a matter of your own interpretation as well. He's either being treated by Keith a/k/a "Dr. Bipolar" or he IS the patient and his hallucinated delusion is that he's somehow in charge instead of under guard.

"Fantasy lyrics, bipolar expression
Dr. Bipolar, riding around with the mirrors reflecting
the same serum injected, expecting the Wolfman message
Bark at the night dog, in tight white drawers
In the house watching Mr. Slate coming by making house calls
Am I right? Or am I wrong? Dr. Bipolar"

Does it make sense? ALMOST. The thing is that for Keith "almost" is actually good enough. As long as he gives you just enough of a verse you can follow you can fill in the gaps. "This time I'm watching myself impersonate another person without the curse." He could at this point be protagonist, the patient, or it could even a veiled reference to alter egos like Dr. Octagon he'd rather shed and be done with. Thanks to L'Orange it all comes together over a track with hard hitting drums and pulse pounding bass, with an intense layering of samples that both supports Keith and melts away when he doesn't need it. Background notes wobble, certain in their own uncertainty, until a hypnotist comes in and attempts to put our protagonist back into his comatose state. At this point the almost completely forgotten MC Paul Barman makes a surprising cameo as The Wanderer's subconscious voice, trying desperately "to travel through space to wherever L'Orange is." There's definitely a method to Keith's madness this time around though, because the concept behind the album and L'Orange's natural musical proclivities create a balance for our emcee to express himself properly. His own track "The Wanderer" sums this up ideally over kick and snare tap met with jazzy piano keys. "The structure of combat is like - WrestleMania contracts. The genetics make the eye contact." "Denim? I have nothing to prove in slacks." It comes across like individual thoughts that sometimes seem to piece together and sometimes don't, but unlike some of Keith's more excessively self-indulgent projects it doesn't bog down in scatology and pornography. Another thing that helps Kool Keith achieve balance on this relatively short album (34 minutes) is the guest appearances. Aside from Paul Barman they're not entirely unexpected, as you can see how J-Live (on "The Traveler") and Mr. Lif (on "Twenty Fifty Three") can recognize Keith as both a peer and an inspiration in terms of their own unconventional approaches to hip-hop. The thread that ties them together is not like-minded flows though - it's the broad paintbrush that the singularly colored L'Orange strokes his musical canvas with. He can take you from solid boom bap rap to futuristic jazz at his own whim, and whatever direction he travels The Wanderer will follow. It's a process of continuation to move and push it along. By the time The Wanderer's rocketing timeship is heading back to Earth on "Days I Used to Know" you're upset that the journey is over so soon. Thankfully there's one bonus track after they land "at the ancient city of Philadelphia" though - a typically inventive L'Orange track called "Sometimes I Feel." The background sounds are like a Kanye West or RZA female vocalist but NOT sped up - they are CHOPPED up. The Wanderer vows to explore new inventions of hypertension, while vaguely alluding that he "feels a certain way, on a certain day." What way is that? Whatever it is he's VERY certain he feels it. It's all a little bit nuts right? Your head might be just as scrambled though if you had managed to rip apart the laws of time and space and move back and forth through the 4th dimension without the natural biological imprimatur possessed by a Time Lord in symbiosis with his/her TARDIS. Being a little bit off actually makes sense in this context, but thanks to L'Orange on the beats, being off is actually dead on.