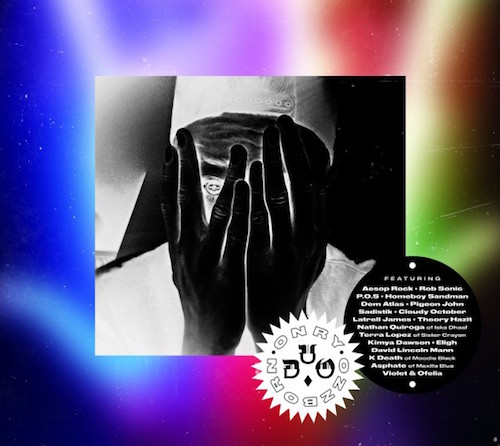 "Double fisted and twisted as those barbed wire fences
that kept you inside the institution - made you pretentious
Instead I invent at a level beyond most..." - "Stardom"

I can't say for certain whether or not you'll know Onry Ozzborn going into this review, but he's been active on the Seattle hip-hop scene dating back to the late 1990's and has almost a dozen solo albums including this one. Why aren't there more Ozzborn reviews here then? A fair question. In part it's because he didn't always have the right distribution channels, but that has changed since he linked up with Fake Four to put his shit out. In part that's because of his penchant for being part of groups which obscure his fame accidentally or intentionally. He was one half of Dark Time Sunshine, one-third of Grayskul, and one of over twenty members of Oldominion. It's fair to say Onry is prolifically involved in things OTHER than spotlighting his solo career and by his own choice.

As it turns out that's not a coincidence on "Duo," where every single track for 50+ minutes of music features somebody other than just him. Just as with his past groups and collectives, you certainly can't fault the talents of the people he's working with. P.O.S. from Doomtree (and a ton of other groups - a kindred spirit to Ozzborn it seems) joins him on "Turmoil." Inventive left coast mainstay Eligh spits his rapid fire bars on the aptly titled "No Time to Waste." Underground favorites abound around the album - Pigeon John on "Firefly," Homeboy Sandman on "Wine," Aesop Rock on "Nineteen," the list goes on and on. I was honestly surprised El-P and Killer Mike didn't end up on "Duo."

It's an ambitious project for Ozzborn, one for which he's even filmed a 15 minute mini-movie (seen above). Collaborating wears well for Ozzborn and always has, though I still appreciate the times where he's more obviously the star. Kimya Dawson takes a break from collaborating with Aesop Rock to do a sing-song rap on "NeoNerd" but clearly doesn't outshine Ozz. The same goes for hipster-hop veteran and Iska Dhaaf member Nathan Quiroga, even though both of them do a little singing "Flee the Colony." But I'm just going to bottom line this - I'm clearly going to need to go back to one of Ozzborn's older albums if I really want to get a sense of what he's like on his own. All I ever seem to get or come across is him working with multiple people and fading himself at least halfway to the background or more - but on "Duo" it works just fine. If he wants to share the limelight it's his call.