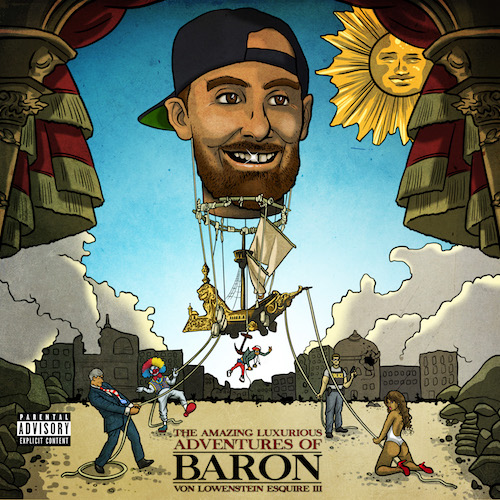 The obvious allusion in the album's title and cover art is to "The Adventures of Baron Munchausen," a film that I'm going to assume from the start that a majority of the review's readers have never seen. Would I recommend it? Yes. Get settled in first though. Get a full bucket of popcorn, several drinks, and a comfortable seat in your living room or rec room. It's over two hours long and it's a pretty trippy ride - you may want to make those aforementioned "drinks" alcoholic if you're of the legal age to consume them. If you don't get through it all in one sitting I'd understand. If you have to rewind several sections of it to figure everything out I wouldn't blame you.

The album itself really doesn't have a lot to do with the movie so it's not a prerequisite to listening to Big Lo. An appreciation for beats and rhymes that are serious in their presentation and well crafted in their construction. The rapper is either from Pensacola or Vero Beach, Florida depending on whose bio I'm looking at, but he doesn't sound anything like Flo Rida, nor does he sound like the Common and Jay-Z samples found in the chorus of the lead single "Dystopia (Dream World)." This track in particular DOES open with a snippet of the movie, but the bars of verse two are what I'd like to focus on instead - delivered in a grim tone that's equal parts Prodigy and Vinnie Paz.

"Pardon the violence - I'm praying for silence
I'm trying to silence the demons that prey on me when the night hits
I grapple with lions - I dabble in science
If you can picture 'Pac rollin, you should picture me flyin
An eye for an eye I'm - branded with iron
Sacrifice my sanity to paint a picture so vibrant
With precision engineering you can tell by the timin
that I'm just preppin for a post-apocalyptic environment"

The Cyborganics production perfectly matches the hard hitting rhymes, but besides the "opulent jewels" that he's spitting, what really catches my attention is the cadence of his delivery. Big Lo plays with the instrumental like a violin master playing with a great conductor - being led but simultaneously leading everyone else listening. That same sense comes across on every track of this remarkably quick eight track release. From Nickel Loot Tester's dramatic sweep on "86 BPM" and "Mint Julep" to Fan Ran's piano notes on "Black Magic" and mournful melody on "Carpe Noctum" featuring Inferno, every beat is exquisitely chosen and well delivered. Nickel Loot returns at the end for a "Good Life" remix, but I admit I'm a bit lost (like the movie I need to rewind) because the original version is not on the album. Perhaps it could have been included.

That's a very minor complaint though compared to an incredibly enjoyable album, one which left me wishing that Baron Von Lowenstein's adventures had actually lasted as long as Baron Munchausen's. It's almost torture to deliver a quality release this short when you're named after a movie that's double the length of even the longest albums that tend to be released these days.