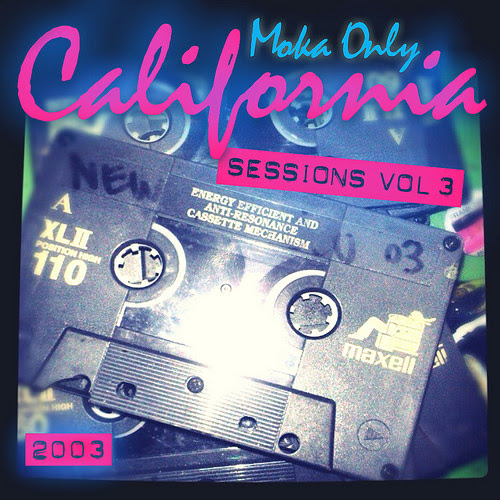 I seriously can't keep up with Moka Only. It's not for lack of interest. With each passing year my estimation of his talents and abilities continues to grow, especially as what passes for commercial rap on urban radio runs the risk of alienating me from the arts I've dedicated over two-thirds of my life to. Moka's music fits into the same category for me as artists like J-Live, Lyrics Born, De La Soul and Mega Ran -- anchors that always hold me down when other rappers don't even rap any more and sound more like bad singers than good emcees. It's funny that I mentioned Random on that list though, not because he doesn't fit, but because he's another quality artist I enjoy who is more prolific than I can keep up with. I can't devote the entire website to just two rappers every week but the way they drop material on the regular I almost could.

The truly astonishing thing about Moka though is that he's so prolific that even HE can't keep up. As the Nowfolk review illustrated, Moka has projects in the lab that due to malfunctioning studio equipment, lack of time or a change of heart almost never comes out. He could probably live the rest of his life releasing an album a year just from his extensive backlog of work, even if he wasn't still constantly recording new ish. It's also telling that this particular review is "Vol. 3" of his Cali sessions and we haven't even had time to look at the first or second volume. Once again Moka is blowing the dust off some old ADAT tapes he was recently able to resurrect and remaster, which means everything on this CD/LP dates back to 2003.

That may be the thing that trips me out the most about Mr. Denton -- his unnecessary honesty in the face of a music industry that fabricates reality almost constantly. If he told me that he recorded these sessions at 2016 I'd not only take him at face value I wouldn't ever know any different. He's so consistent in his quality approach to production that he doesn't ever really make anything terrible. His "average" would be "above average" for most other producers, and as an emcee he has a very charimg Native Tongues like way of melding into and riding a groove. I suppose in some ways it would be a knock to say that Moka doesn't drop quotables that are memorable, but when he says "I rock to the rhythm when I rock my rap" on the aptly named "Rock to the Rhythm" that sums it up quite nicely. He's just pleasant to listen to. He doesn't over reach for something unnecessarily profound, go off the tempo in a jarring way, or spit something ignorant that would be a turn off and make you stop listening. If the late J Dilla were still with us these are the songs he'd be making.

"Yo, here's another bit right here
Rock this mic where, you scared to take it you fear
Anything you ain't hearin you afraid to be
Dope fresh mack you know on the M-I-C
I'm in the house, and the house it belongs to me
Studio by the bed, I got my beats
Still got my... Christmas tree
I'm an oddity, how strange this must be"

It's not odd at all - it's familiar and comfortable. Listening to Moka Only is like putting on a comfortable pair of slippers and sipping on your favorite drink. It just feels good. Even his short instrumental joints like "Mystic Moke" invoke harmonious vibes. The song titles invoke the approach to Moka Only you should take: "Check Me When I'm Chillin'" on a "Friday Night" when "Something's Going On." I really love the crackling record and tinkling pianos of the latter, paired with a subtle choral "ah ha ha" before he starts spitting bars. "Here's looking at you kid" quips Mr. Denton like his new alter ego is Moka Bogart, and there's definitely a Casablanca air of old school charm to this old school compilation. In the words of the Digable Planets, Moka's just cool like dat.