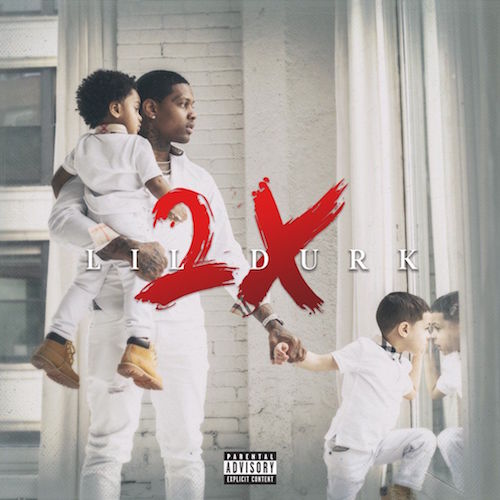 By now you know the deal with drill. It's the signature hip-hop sound of Chi-Town for the 2010's, with prophets like Chief Keef, G Herbo (Lil Herb) and Fredo Santana leading the way into the darkness. The music is much like the hardest enclaves of Chicago - unrelenting in their bleakness and nihilistic outlook. You can hear all of this encapsulated in the title track of Lil Durk's "Lil Durk 2X," produced by Cassius Jay and Zaytoven. The AutoTuned sung vocals and crisp background drums might briefly fool you into thinking it's an upbeat song, but when you pay attention to the words it's clear Durk came up in a war zone and war is all that he knows.

Even though drill has developed into a regionally specific style and sound, it's not hard to hear the influence of Southern trappers like Gucci Mane on the scene, and collaborations like Future appearing on "Hated on Me" are both natural and expected. In fact there are virtually no surprises in terms of cameos on "Lil Durk 2X." He doesn't hit us with anything out of left field like a song with ScHoolboy Q or Killer Mike, but his fans aren't asking for that anyway. What you have to respect about drill rap, even if you're not a fan of it personally, is that the rappers in the scene are relentlessly producing exactly what those who love the music and live in the same neighborhoods as its biggest stars want to hear -- and "My Beyonce" with Dej Loaf is exactly what they're asking for. C-Sick's track and Durk's duet might be the 2016 equivalent of Ice Cube & Yo-Yo's "Bonnie and Clyde Theme." It also might be the furthest outside of traditional drill that the album reaches and not just geographically (Dej hails from Detroit) in that it advocates a romance worth living for instead of a life where there seems to be little hope on the horizon. If that's not the joint that shows you drill might be starting to evolve just a LIL bit then maybe it's "She Just Wanna" featuring Ty Dolla $ign. The topics are the same hustle and grind we know of old but the ChopSquad sound is surprisingly upbeat and pretty damn easy to roll to.

Ty sings that they're in "love with money" and not women, but as noted "My Beyonce" suggests Durk may be in love with more. Still when you drill you gotta stick to the script and that's what Durk does for 46 minutes and change on the full length "Lil Durk 2X" (a little over 39 if you get the stripped down version). It's hard at times to be a fan of this genre, because it can be overly formulaic and offer little hope for the future, but despite the dark trappings there's still some musically redeeming fun to be had. If you were going to give drill a chance for the first time starting here wouldn't be a bad idea.