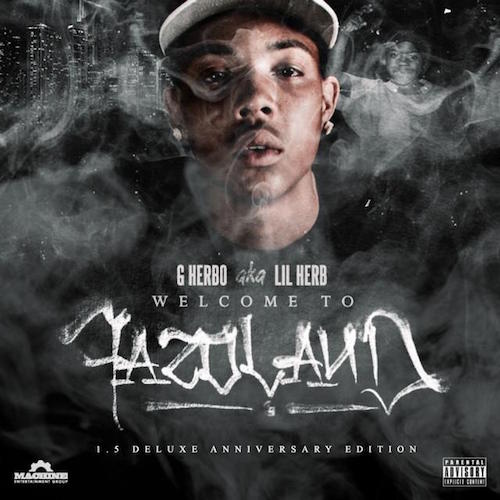 The rise in popularity of G Herbo a/k/a Lil Herb coincides with the rise in popularity of Chicago drill music in general, put on the national map by artists like Chief Keef as well as his friend and comrade Lil Bibby. The shortsighted critics and naysayers have bemoaned the dark and heavy sound, mixed with unapologetically and proudly violent verses, while failing to give consideration to Chicago's impoverished neighborhoods and sky high homicide rates as context. Drill does not exist in a vacuum. It was and is the natural response to an oppressive and hostile environment. The heavy and oft-times morbid music is actually a sign of hope for Chicago youth. Drill shows that there's a way to put that pain to music, to turn it into art and to turn that art into a profit, and to use that profit to raise yourself and your friends up from the bottom to the top.

Herbo's "Welcome to Fazoland 1.5" is not a long statement of that scene, but one might have guessed that from the decimal point in the title anyway. This album is very much a half step between projects, coming between the commercial release of the "Strictly 4 My Fans" mixtape and his OFFICIAL debut album "Humble Beast" later this year. That doesn't mean it's a less considered or produced project than either of those releases, even though you can digest this entire release in just over 20 minutes. It starts out strongly on the pounding "Missin 'Em All," which as you might suspect is a dedication to friends who are no longer here, yet some might miss him saying "as long as my little sister straight" in the middle of the first verse. Once again that's why I don't buy it when people dismiss drill as nihilistic and dangerous. Herbo is clearly looking out for his FAM here, and as he says himself:

Even amongst the love for his loves ones both here and departed, things still stay true to the heavy drill themes on tracks like "Dropout." Herb may catch you some of his naysayers off guard with the brag lines "Growing up got A's and B's in school, ain't have to drop out/I ain't want no 9 to 5 cause that's a copout" but I can always hear the thought that Herbo puts into his bars before he spits.

"And when my teacher sat in the classroom
I had it, still could complete my assignments
When she ask me if I been to sleep and I hadn't
Couldn't had been, I was grindin
Remember niggas addin, I was just static
but what they be, I was shinin
Just go back on my record of history of hatred
you see come from me, underline it"

As much as I'm giving Herbo his props here, I still have to confess that the AutoTuned style hook and repeated click-clack of weaponry that opens "Frfr" (f'real f'real) isn't my vibe. On a six track release even one miss is noticeable, and while I wouldn't call "Know Me" a miss per se I could take it or leave it. Things come back around hard on "Do What I Wanna" though, which for those who have been around long enough could be the drill equivalent of Digital Underground proclaiming "Doowutchyalike." That's exactly what Herbo and his friends are going to do, right down to "taking a bath in money" while drinking and smoking marijuana whenever they damn well want-ta. The proceedings come full circle on "Me," a self-assured statement from Herbo that nobody's going to take the hard earned success from him he's finally achieved. Of course that's the whole source of strife in Chicago's streets in the first place. It's hard to get yours without somebody who has nothing being envious that you finally got a little guap, and given the relentless pressure cooker environment, taking it by force from someone who has it might seem like the fastest way out. That's how the violence happens. It's not going to go away overnight, just like the racism that created the ghettoes and projects isn't going away overnight. Until then drill music serves as a reminder that times are hard, but a hard young man like G Herbo can still find a better way to overcome adversity through music.