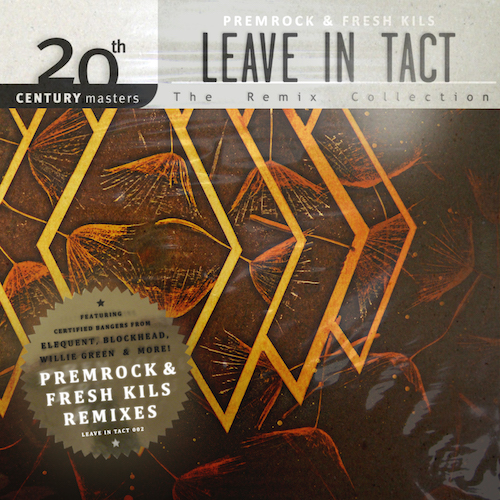 Right away I'm amused by the coverart for "The Remix Collection" as it's a clear homage/parody of the "20th Century Masters" album series released by the Universal Music family of labels. You've probably walked by a bin full of these albums a dozen times at Best Buy or Walmart, always bargain priced (half or less of what most new albums retail for), invariably featuring what amounts to a "greatest hits" compilation for whatever artist is featured. I like to think of them as the kind of CD you would buy if your car didn't have an auxillary jack or Bluetooth connectivity for your smart phone, but only if you were already on a long road trip and incredibly bored with the compact discs you already played twice or more. They fill that incredibly small niche of "oh what the heck it's already five bucks and I need something else to listen to," but that niche must have been profitable because they sure did release a lot of these things over the years. There's a Heavy D. & the Boyz version of "20th Century Masters" that I've actually been meaning to check out as a tribute to the late great Overweight Lover, but for whatever reason I've never gotten around to it.

Anyway Mark will probably be confused by the fact we're reviewing "The Remix Collection" instead of the "Leave In Tact" album it was spawned from. It really looks like I could go to Walmart and buy this PremRock album right now though, which makes it doubly depressing that I've never actually seen a PremRock album in ANY store. I think the only good ways to get a hard copy of PremRock's work is to either catch him on tour or buy it directly from him on Bandcamp, though the fact he's now linked up with URBNET gives me hope that hard copies will be more easily available in the future. I couldn't find this one on Amazon, although the aforementioned original album

was available. What you're about to read could in some respects become a reverse recommendation to go pick that up.

The truth of the matter is Fresh Kils is not the kind of producer who needs to ever be remixed. His work is singularly dope enough to be left alone -- he got it right the first time, 'nuff said. Therefore the idea of "The Remix Collection" is itself intriguing. Why mess with the originals? I can say that having not heard them simply because I have that much faith in what Fresh Kils does. Despite that "The Remix Collection" offers a worthwhile collection of unusual soundscapes spread over a nearly half hour span, working with some of the best talent out there NOT named Fresh Kils. One of my other favorites of the 2010's is L'Orange, and he gets into the mix here by flipping "Saudade."

"Believe in nothing, but still believe in us" quips Mark, as L'Orange arranges a mixture of thumping drums, string samples, piano riffs and jazz singer vocals into an instrumental I'd love to dissect WITHOUT overlaid vocals. That's not to take anything away from the gruff intellectual bars that Mark spits, but L'Orange really went the extra mile here, complete with adding intentional audio distortion at the end of the song that makes it sound like the tape was getting bunched up in a reel to reel or jammed in your car's tape deck. Each audio presentation has its own flair though, such as long time producer Blockhead creating an instrumental that's booming and simultaneously liquid for his "Winter on Broome St." redo. Everything vibrates for about 90 seconds until he briefly cleans it up for some sharp xylophone sounds, all before bringing back that watery bassline. As noted it may be hard to compare these to the originals without that context, but given how enjoyable tracks are like Willie Green's version of "Play On, Band" and the Maker's Mix take on "Losing My Mind," it gives me the incentive to follow the rabbit down the hole and explore "Leave In Tact" to see what Fresh Kils did and how these producers still put a worthwhile spin on it. In the meantime while I get around to that pleasing prospect, why not give "The Remix Collection" a listen? Music Vibes: 7.5 of 10 Lyric Vibes: 8 of 10 TOTAL Vibes: 7.5 of 10