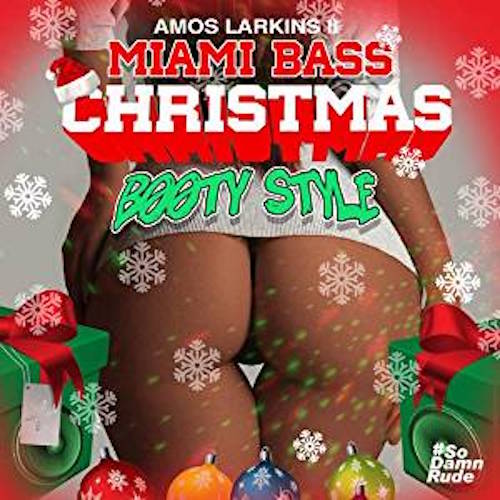 "Oh what fun it is to ride in a sleigh full of that bass."

Even though this is an album obviously meant for the Yuletide season, the timing was such that I didn't get this and review it until now, so there's a chance I might have been in a more jolly festive mood during Christmas time. Let me be clear that I've said many times before that there just aren't enough good Christmas rap songs. For me the holidays could pretty much start and end with "Christmas in Hollis" and I wouldn't be mad. That's not to say there aren't good hip-hop Christmas albums out there, just that they are few and far between. You can hardly be surprised when a lot of rappers are mad at how much the world sucks, and Lord knows 2017 gave us all plenty of reason to be pissed off, so it's hard to expect everybody to suddenly shift gears and give cheer. Maybe an older generation of emcees who has kids of their own they want to leave a better world to is the ones we have to rely on to bring that holiday positivity.

I suspect Amos Larkins II is such a person, and good on him for the attempt, ESPECIALLY when you consider that the only thing more rare than a good Christmas rap song is a good MIAMI BASS Christmas rap song. Unfortunately that's exactly the reason things fall apart like The Roots or Chinua Achebe on "Miami Bass Christmas - Booty Style." These aren't exactly genres that mesh well. The progenitors of the Miami style that quickly soared to national popularity of the strength of acts like DJ Magic Mike and 2 Live Crew quickly became synonymous with beautiful women who have big booties who in the words of Pharoahe Monch could also shake them breasteses. Long before white girls were twerking, black girls were working that bass. The big beats are meant to dance to and the raps are often sexually explicit and/or secondary to that boom and pound. Does that make you think of "Silent Night" in any way? NO. And from an artist who is otherwise best known for songs like "Pop That Cherry" (example below) it doesn't make sense.

Either intentionally or accidentally there are no Soundcloud or YouTube clips of this album I can embed. That's probably for the best since some of these songs are horrifying. I know a producer who's name I'll redact here for his own benefit and refer to as "Mr. X" who used to produce AutoTuned songs for fun in his spare time. He'd sing over his own beats or other people's popular instrumentals and when he'd send me the tracks you could tell he was just messing around with it and knew if it was bad it was good for a laugh. I don't think Mr. Larkins was going for the Mystery Science Theater 3000 approach here. If you're daring enough to buy the album YOU can listen to it that way and laugh at his ill conceived renditions of "Rudolph the Red Nosed Reindeer" and "Deck the Halls," complete with lines that no one has ever sung at Christmas or ever WILL. I'm not sure he even knows that caroling is a thing, and on top of that he starts to freestyle about "Yuletide treasure." There's only one thing I can do to describe my reaction. I'm sorry Amos, I know I'm being hard on you, but I'm also doing it with love because I WANT to like this concept. I think if this was a little more on the "Bad Santa" tip, a little more on the Eazy-E "Merry Muthaphukkin Xmas" side of things, I probably could have gotten into it. Really crank that bass up to the max, rap about some girls sliding down a chimney straight onto your... well you get the idea. A "Miami Bass Christmas" should feel like a party where people drank too much eggnog and started rapping like the late great Fresh Kid Ice, but instead this feels like an album full of songs Mr. X sent me as a prank -- but it isn't.