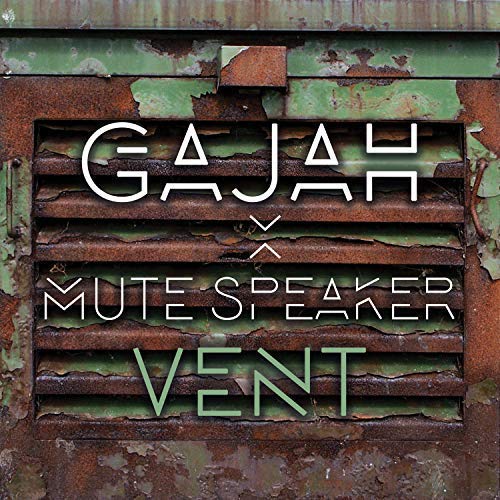 2018's "Vent" reunites the team of Californian rapper Gajah and UK producer Mute Speaker, a duo first heard by the rap world in 2013. Gajah was already an accomplished emcee known for his own work and as part of Acid Reign, while in my review of their debut I admitted to not knowing much about Mute Speaker by comparison. It turned out to be a fruitful partnership though, and one I certainly wasn't opposed to hearing more of.

If there was another album by this tandem in the last five years I haven't been able to find it, so I'm going to go ahead and call this the sophomore album. It's not an overly long follow-up at a few ticks past a half hour, but from my own memories of the last joint the sound is almost exactly the same. Gajah is an enigmatic vocalist who may frustrate those who are not fans of Mr. Lif, Chali 2na or Keith Elam (RIP Guru). He's not monotone in his delivery, but he has such a naturally deep voice you may accidentally be fooled into thinking it is. He's also got a slight tinge of whiskey throat, as though his vocals are being given a hipster 1950's warm microphone nostalgia effect by Mute in the studio, but I didn't discern any audio trickery then OR now. Maybe he's got a few polyps on his vocal chords, or maybe he used to smoke menthols, I don't know. Either way it tends to be mesmerizing when listening to him, making you focus closer to the words on tracks like "I Grew Up" featuring DJ Ethos.

"I found ways to make reality more interesting
I'd grab a basket of toys that ran on batteries
Open 'em up and alter the insides mechanically
Mad crafting and naturally savage deattaching wires
from circuit boards and motors, and mix matching the gadgetry
Like Cid did, but more complex, this whiz kid mastermind
would Frankenstein the randomest objects"

The draw of Gajah is that his songs tend to be this intensely personal. He's not putting on an image of a flossy rap superstar raining wealth down on gyrating hoes, nor is he sipping lean from a bottle of Sprite and AutoTuning himself until he's unrecognizable. Gajah is just exactly what he seems to be with no artifice or deceipt and in Mute Speaker he's found a kindred spirit. The slow and softly stirring sounds of "Bad Plan" is only disturbed by the ACTUAL sound of crickets when Gajah mentions them. Gajah confesses to alcoholic tendencies on the whimsical/disturbing "Rounds" as the sound seems to reverberate off of the walls at a local watering hole. Even when kindred Cali spirits (pun intended) like 2Mex and Woar2 chime in on "Killing 'Em Kindly" the vibe is still pure Gajah.

I don't know if that will convince you to seek out "Vent" and buy it, and there are so many choices these days I can't say it will hurt you if you don't, but I do think the world is a better place for having Gajah in it making music that's personal, honest, and driven by quality and not the popular trends of the day.