:: ANTRA/A&M/PolyGram
** RapReviews "Back to the Lab" series **
as reviewed by Matt Jost 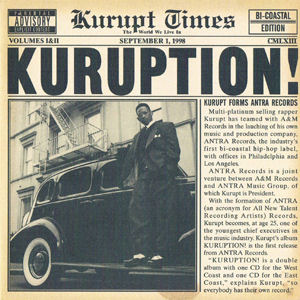 Part of what made Dr. Dre's "The Chronic" so untouchable was the fact that it was such a concise group effort. Like never before on a rap album a carefully picked supporting cast made essential contributions, from RBX to Nate Dogg. And it wasn't just "Long Beach and Compton together," there was Virginia transplant Lady of Rage, and there was Kurupt, a 20-year-old with a fiery, nimble flow who hadn't forgotten his eastern roots, having grown up in the Philadelphia metro area. From "The Chronic" and Snoop's solo "Doggystyle" Kurupt and Daz emerged as Tha Dogg Pound, who in 1995 would complete the triumvirate of classic albums with "Dogg Food."

Then came the turbulent years of 2Pac's glorious return and tragic death and Dre's and Snoop's departure from Death Row while label boss Suge Knight was incarcerated between 1996 and 2001. Even for the loyal Kurupt came eventually the time to break out on his own. He did so in late 1998 with an ambitious double-disc set on his own imprint. Each CD had a geographical denomination, CD 1 representing the West Coast, CD 2 the East Coast.

The West Coast half is marked by Kurupt's allegiance to the homies and the hood. Previously not known for his compassion, he shares the street experience simultaneously with an anonymous comrade and the listener on the opening "This One's For U":

"Hollered at one of the homies the other day
He said someone approached him and he looked the other way
He turned back and drawed, and all he saw -
was a vision of himself... He choked and he awoke
And I just paused to laugh, 'That's some familiar shit
Cause the other day I dreamt up some similar shit'
So I tell him, 'I love you, stay safe,' then I skates
to a whole different hood where different shit takes place
I been geein' since the age of 18
When I first ran into heaters, 9 millimeters
Get the cash as one, all the homies mash as one"

In combination with producer Studio Ton's simple but gripping Earth, Wind & Fire interpolation, "This One's For U" is an early emotional moment on "Kuruption!" The musical side of Kurupt's adopted home is further represented by Warren G, who produces the pensive "That's Gangsta," and veteran West Coast sound architect Battlecat, who modulates the gangsta boogie of "We Can Freak It," where the rapper has a Rodney King moment when he asks, "Why can't we just chill and get along, motherfucker?" Elsewhere he is less forgiving, like on "Can't Let That Slide" or "Fresh," where he spits:

"And I might go slow, and I might go fast
And I might go first, then I might go last
Thinkin' I might not bust - and I just might blast
Or I might just whoop the skin off your ass if you cross our path
You know I'm the rawest MC with it
Fuck jiggy, nigga, I'm DP with it"

Even as Death Row was more or less history, Kurupt tried to keep the Dogg Pound Gangstas brand alive, shouting out Daz Dillinger, Snoop Dogg, Nate Dogg, Tray Deee, Soopafly Priest, and Death Row as well. Daz features on and produces two tracks, while Deee and Soopafly contribute a verse and a beat, respectively. And while there's no mention of Suge, Dr. Dre makes a surprise appearance that was even put in motion in a video clip. But whereas Death Row releases were typically staged as a family affair, Kurupt sounds almost lonely on "Kuruption!" - despite the dozen plus guests. Guests who are often so obscure they may very well make the only recorded appearance of their career.

Kurupt's special skill has always been his latently aggressive demeanor, embodying the rapper who channels his frustration into poignant stanzas. On "Kuruption!" the Raw Dog Assassin often sounds more like a puppy, distractible, carefree, as if to demonstrate that he won't let the pressure get to him. At other times the situation seems to weigh him down still, resulting in a somber, melancholic mood. Combined with minimalistic production, abundant mic time and the absence of high-profile guests, Kurupt's lyrical shortcomings are magnified. It goes well beyond his habit to combine similar words (textbook example here: "Only the survivors survive in a world of survival"), he's simply not the crisp, engaging MC you knew from "Lyrical Gangbang," "Doggy Dogg World," or "Do What I Feel."

Magazine The Source described the lead single "We Can Freak It" as 'the calm before the storm, or the wack MC's last chance to live before being lyrically mangled and devoured.' Sadly, "Kuruption!" proved to be barely bark and virtually no bite, at times coming across like a largely freestyled effort. He parrots Wu-Tang's "poisonous darts" metaphor without remotely being able to match it with words of his own. Additionally many tracks drag along infinitely with unnecessary adlibs.

The selection is littered with cuts that simply don't meet the mark of Kurupt's previous appearances. Soopafly fails to bring the noise with Public Enemy samples on "Make Some Noize," just like his Jackson 5 interpolation is much less effective than the one that made Bad Boy's "It's All About the Benjamins" a smash. Battlecat's "Play My Cards" is a less fabulous version of Ras Kass' "Ghetto Fabulous" from the same year. "Gimmewhutchagot" mismatches a club beat with rambunctious raps. "It's Time" is one of the few and forgettable appearances by female Wu-Tang squad Deadly Venoms. "Ho's a Housewife" meanwhile is completely misnomed.

But it's not all gloom and doom. Treading lightly before any Crip walk controversy was in sight, "C-Walk" represents the West Coast lovely with its airy bounce courtesy of Daz. "Ask Yourself a Question" is more "The Aftermath" than "The Chronic 2001," a slow, sparse and relatively stiff Dre production illuminated by sparkling synth drops. Dre lets Young Gotti finish two verses of sexual and violent content, then appears out of the blue to deliver one of the disc's classier vocal moments ripe with his late '90s "Been There, Done That" attitude. Another legendary producer, DJ Muggs of Cypress Hill, supplies the wistful "Another Day," where Kurupt instructs guests Gonzoe and Slip Capone with some street knowledge of his own:

"Another day, another dollar
Another nigga jacked for his sack, D's and Impala
What the fuck makes life so complicated?
Why they player-hatin' instead of congratulatin'?
One of the homies just bought a new six-fo'
And they mad about it, and talkin' bad about him
Don't trip cause you smoke dubs and he smokes ounces
yo fo' rolls and his fo' bounces
you're planted on the ground and this fool sky-rockets
Got a nigga hot enough to wanna shake his pockets
I'm like Biggie, nigga - two Glock nines
any motherfucker whisperin' about mines"

There is also something like an - albeit fleeting - human element that endears "Kuruption!" to the listener. On "It's a Set Up" he complains about encountering hostility in the east and the west, asking the north and the south, "Are y'all niggas on that same fuckin' bullshit?" On "That's Gangsta" he offers to "throw a gangster reunion and invite 'em all / it don't matter who you are" after reporting from "the valley of the G's, where the riders ride, busters die / Some may survive, but the bottomline / is if you cock your nine / you're stoppin' time." In the aftermath of a much publicized rivalry between Los Angeles and New York, a bicoastal album was itself a strong statement. Not long before, Kurupt and Noreaga traded barbs on "New York, New York" and "L.A., L.A.," but for "Kuruption!" they got together to trade bars on "We Can Freak It (East Coast Remix)."

Other tracks fall somewhere in between. Producer D-Moet, in another decade DJ for King Sun, exhibits "Reasonable Doubt" influence on "No Feelings." Easy Mo Bee breaks out that rich Pac sound for the Buckshot duet "Light Shit Up." "The Life" takes Kurupt and guest El-Drex back to Sharon Hill, PA, from where his mother once sent him to live with his father in California. "Put That on Something" is a curious DeVante Swing production whose extremely sparse sound you'd associate with some Project Blowed or Visionaries cat. On the other DeVante track, the simplistic, thuggish-clubbish, 8-minute-long "I Wanna...," the Jodeci member casts himself as an underground hip-hop producer without any ambitions. Another alumni of the swingbeat era, Dave 'Jam' Hall, remixes "Who Do U Be" into a generic crossover club track.

It's understandble that Kurupt wasn't in the mood to make the most radical record of his career. He had big plans with his company ANTRA (All New Talent Recording Artists), which at the time had offices in Philadelphia and Los Angeles. There were talks of 'Kuruption - The Movie' starring Snoop and Left Eye, the signings of El-Drex, Baby S and King Tee, a collaboration album with fiancée Foxy Brown, and a subsidiary gospel label run by his mother.

None of it materialized. Instead the label's first project turned out to be a poor rapper's "All Eyez on Me," a well-meant East/West summit with too few peaks that falls short of Kurupt's "the best of both worlds" promo, devoid of the potent production previously backing him, hiding songs produced by Dr. Dre and DJ Muggs as unlisted bonus tracks. Young Gotti would soon redeem himself with solid solos such as "Tha Streetz Iz a Mutha" and "Space Boogie: Smoke Oddessey," but as one of the most uninspired performances from a major rap artist "Kuruption!" remains a blemish on Kurupt the Kingpin's considerable track record.