:: So So Def/Columbia Records
** RapReviews "Back to the Lab" series **
as reviewed by Steve 'Flash' Juon 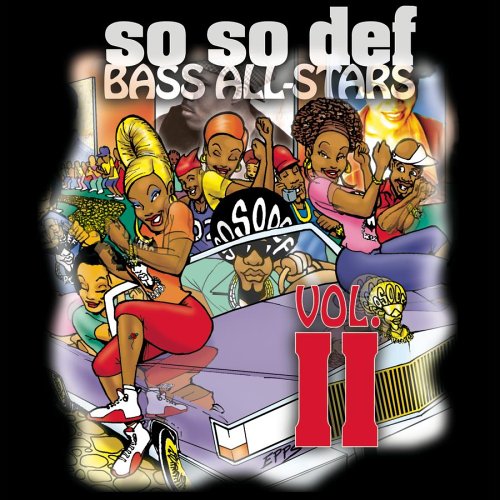 There was a period from the early to late 1990's when the name Jermaine Dupri was synonymous with hits. Fresh off the youthful hip-hop sensation of his creation named Kris Kross, the 20-something producer was flush with both the cash and the credibility to launch So So Def Recordings, subsequently signing a distribution deal with Sony and Columbia Records. Ironically as Dupri had launched Kris Kross before he had his own label, they were not part of his fledgling roster of artists, though as the producer behind all of their chart topping hits they were still very much under his thumb. Dupri quickly put together a list of "all stars" who would benefit from his musical genius, and soon acts like Xscape, Da Brat and Jagged Edge all benefitted from the Dupri touch.

The inherent danger of being so young and so successful so so fast is that it can go to your head and leave you feeling incapable of failure in any way. With one album after another going gold or platinum, Dupri kept on expanding and increasing the scoop of his Atlanta based empire, and that rolled right through 1996 where he capitalized on the popularity of bass music with the "So So Def Bass All-Stars" album. The song "My Boo" from the Ghost Town DJ's has remained an enduring presence from the album, charting both in 1996 and 20 years later thanks to the popularity of the "Running Man Challenge" meme. That unexpected success led me to dig back into the archives at RapReviews, and while I can't find a copy of "Vol. I" as such in my stacks, I did easily turn up a copy of the sequel "Vol. II" released one year later.

In an eerie coincidence, exactly one song from the album went mainstream with Billboard success and a video in rotation on MTV, this time a cover of Ready for the World's hit "Love You Down" remade by INOJ. I haven't seen any memes spring up based on this song, but I wouldn't be surprised. In many ways it is the prototypical song of the Dupri era, although J.D. didn't produce it himself. Charles "The Mixologist" Roane gives Melvin Riley's original song a modernized uptempo tempo, while INOJ sounds equal parts coy and seductive in a way that with all respect to Ready for the World was never achieved by the original. It's saccharine but inoffensive at the same time.

As for the "Bass" in the title of this compilation, I found myself wanting more and receiving less of it than promised. I think in my head thought this album would have the pounding sound of 1990's artists like 2 Live Crew, DJ Magic Mike and the 69 Boyz. Lathun's "Freak It" (the flipside of INOJ's single) achieves sufficient bass on track #3 -- not Magic Mike levels but good enough for me feel my toes twitch and my fingers itch. Even though I'd prefer a rap with my bass Lathun's crooning works, but from there it's one syrupy R&B song after another back to back. Virgo's "Apple Pie" is TOO saccharine and will give you a tooth ache. Corina's "Summertime Summertime" is a perfect song for the time of year this review is being written, but its lack of depth and mediocre instrumental would be obnoxious in any other season. Ghost Town DJ's remixing their own hit from the last volume feels cheap and unnecessary. There's a whole lot of filler in the first half of this album, though things do turn around when Zae and Sonji bring it back to that classic Miami bass sound with "Booty Time." I expected similar results from Miami legend Luke's "So So Def Quad" featuring Kandi of Xscape, but this song is surprisingly flat. I wouldn't want to spin it at a party. Thus we've come to a suitable definition for a bass song - it should either boom loud enough to shake your car riding down the highway, or be an energetic song to throw on so drunk people can shake their tailfeathers - and if possible both. For an album that's billed as "All-Stars" that should have been an easy achievement. You would assume this is the cream of the crop, but the truth of the matter is that the majority of this album is bargain bin filler you've probably not heard from in the last 20 years. I don't know what Edward J has been doing in the interim, but after hearing his inaccurately titled "Bass" featuring the offensively named Poon Daddy, I couldn't care less. Lil Jon is supposedly on this track (he's also the album's executive producer), but there's not a single "WHAT?!!!" or "YEAHHHHH!!" to spice up the proceedings. Bohagon would go on to be a featured guest on Lil Jon's "We Still Crunk!!" album, but his own "Uh Uhh" has a title that sums up my thoughts on it. It's a six minute song that would be better half as long. Don Yute? He injects some reggae flavor on "Hard Core Wuk" but the sound devolves into a silly parody of Toni Basil's "Hey Mickey." Gucci Crew II are arguably legends of the bass scene (with a fairly tragic story) but even with their pedigree "Sally (That Girl)" is more one dimensional than a sheet of paper. It's evident that "All Stars" in this context was a marketing title as opposed to a true assemblage of the greatest bass artists, nor do they consistently produce the greatest songs. There are a few high moments, some really low moments, and a lot of songs that don't have anything resembling "stars" on them other than at the exact moment this album dropped. That's a shame given both Lil Jon and Jermaine Dupri were ostensibly the driving forces behind this compilation. Their name value and connections should have resulted in the best of the best giving us a non-stop album of thunderously fun and over-the-top bass heavy party music. Instead "All-Stars Vol. II" is a solid MEH at best with a handful of highlights and a largely forgettable cast.