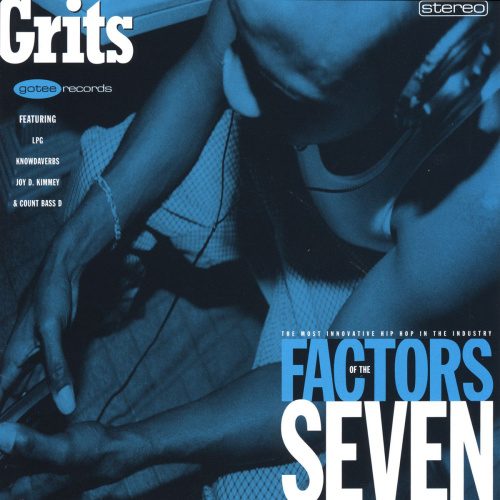 Factors of the Seven

Grits :: Factors of the Seven

A while back, I reviewed MC Ren’s album. One of the things that annoyed me (well, maybe not annoyed, but clearly got me thinkin’) about Ren’s album, is the fact that he was complaining throughout the whole album about how Hip- Hop isn’t what it used to be and that fools should go back to the dawn of Hip-Hop, but the artist himself doesn’t do anything himself in order to change the situation. Ren’s album is full with these complaints, but never once does Ren try to make a joint the likes of the type he so much wants Hip -Hop to become again. The same goes to Jeru. No doubt, he’s a skillful emcee with a problem- while he has a burning desire to change Hip-Hop, he doesn’t have the power to deliver a changed product.

“This is no simple reform, it really is, a revolution.”

The only album I heard recently which addresses the situation in Hip-Hop and succeeds in it’s mission to do things different is also the finest underground Hip-Hop album I ever heard, and I heard LOTS of underground Hip-Hop. The Grits, str8 outta Nashville, are Teron and Stacey, musical talents and lyrical mosaic makers.

They succeed to teach without preaching, to make extremely melodic tracks without being corny, bring soulful southernplayalistic choruses and sound original. How do they do that? Musical diversity is the key. The Grits bring the same energy their southern brethren Outkast bring, musical wizardry which sounds like an impossible cross between the West’s DJ Quik, the South’s Organized Noise, and the East’s The Ummah: Crystal clear production with thunder, thick basslines and and an impressive arrangement of live instruments- Keyboards, Bass, Guitars, Piano, the whole 9. Tracks like the graceful “People Noticin’ Me” with Count Bass D, the serene “What Be Goin’ Down” and the orchestrated “Blame It On You” spark an instant groove. The latter track uses live classical music with R&B flava, which sounds impossible but it delivers like Karl Malone in the paint.

Lyrically, the only thing left to be desired is a clearer sense of direction as the album includes several political tracks, but in order for these to be effective and move the masses, they should be very straight forward; The Grits are very intellectual and approach everything from a different angle, which means you have to listen very closely to understand the political aim. Still, the political direction will be very clear to serious Hip-Hop headz.

“I exercise with the vocals, apply verbal choke holds, to theological minds who try to unfold, these written analyzations of things seen through the eyes of X, the generation I’m next.”

When The Grits rap about personal experiences, the state of Hip-Hop and everything else, the flow is simply flawless. They sometimes remind me of other southern rappers like Outkast and the Goodie MoB, but they definitely don’t bite. On “On My Own” the rappers show how keepin’ it real is really done, and they represent themselves and not a corporation like Nike or something. I wasn’t this impressed with an album for a long time, and one can only hope that Grits will receive national recognition, for Hip-Hop’s sake. 18 tracks of melted butta.