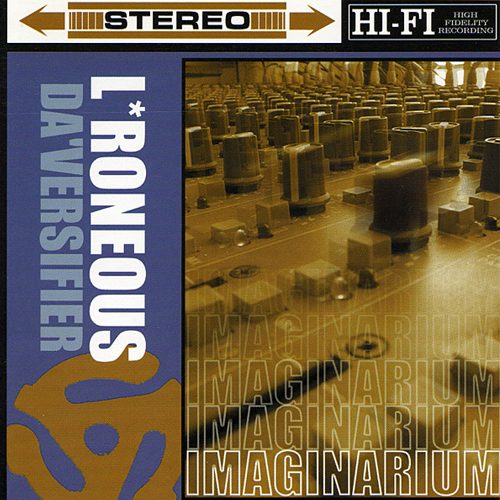 The music industry never seems to learn that all the hype and press you can buy and all the posters you can plaster never add up to what TRULY sells an album: dope lyric skills and a selection of fat beats. L’Roneous certainly doesn’t have the publicity empire of Harlem World (in fact I only learned about this album through posts on rec.music.hip-hop) but that doesn’t matter. He doesn’t have the name recognition of Cash Money Records or No Limit, but that doesn’t matter either. L has what so many other people in hip-hop today are lacking: SKILLS IN ABUNDANCE.

Reaction rate escapes the, scopes of isotopes, called/ yes yes y’all, so pipe you toke, all dank smoke provokes/ the musical, whimsical, chemical, quantum lyrical/ stylist, compiling, reply to the stimuli/ Exemplified by the amplified phenomena/ Deep like operas, completing thoughts to the, finish in this/ I’m about to dent a sentence with the emphasis on sentiments -> “L’Chemy”

I have no idea who DJ Zeph is, but since the liner notes credit all of the music on this album to him I’d love to get his phone number and give him a call to say THANK YOU. You can’t even begin to comprehend how smoothed out the grooves are on “Implosion”, the soulful horns and beautiful scratching are on “A Placed Called This” or how refreshing the bass is on “No Limitations”. Listening to this album is a pure pleasure whether blitzed or sober; either way it’s bound to induce the kind of pleasurable feelings that can only come from good hip-hop. L’Roneous is a versatile MC who can easily switch up from raw braggadocio raps to personally introspective views on black self-hatred; as he does on “The Rains”.

See, I blame it on this land here, this/ 130+ year old experiment, I fear, has failed/ prevailing an ailed basis of black-on-black crime, black-on-black war/ You don’t even hear about Irish fighting Italians no more… -> “The Rains”

Listening to an album this good leaves you feeling that the MC who just captivated you for the past hour was given a gift from God he is compelled to share with the world. And so he does. You’ll nod your head, you’ll tap your feet, you’ll rewind to catch his lines, and you’ll walk around for days whistling his melodies and reciting his lyrics. L’Roneous is that good; possibly too good – it may be beyond the capability of people saturated in the banality of Mase and Master P to realize how truly brilliant this album is. That’s a damn shame; they don’t know what they’re missing.