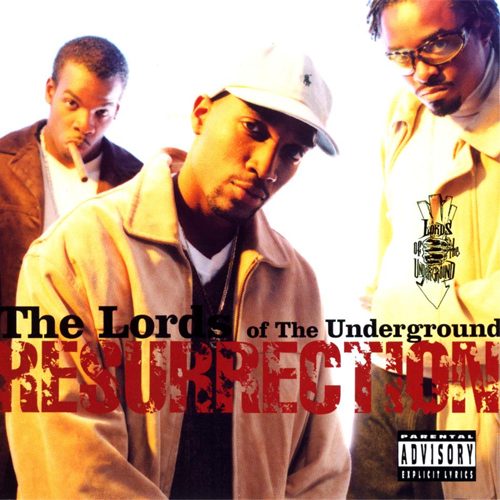 Lords of the Underground :: Resurrection

Just when you thought it was safe to make records.. the ground trembled, the asphault cracked, and the Lords of the Underground emerged from beneath with the forgotten funk – or as Mr. Funke says on “Retaliate”, “Thought we was dead, but the dead has been resurrected.”

You may remember the verbally ill Mr. Funke and the word twisting DoItAll from hip-hop classics like “Psycho”, “Funke Child”, and “Here Come the Lords”. Unfortunately their stellar debut album was followed up by a musically marginal release which seemed to confirm the age-old myth of the sophomore slump, and LOTUG dissapeared back beneath the surface. For them, this may have been the best thing that could have happened – four years away from the pressure of hip-hop’s spotlight gave them the time to polish their rhymes and update their music.

As a result, The Lords do not sound at all out of step with their 1999 contemporaries. In fact, they occasionally sound eeriley similar to fellow Jersey natives Naughty By Nature – but this is not at all deterimental. Considering that their early albums were littered with a vocal pitch that was either “unique” or “annoying” depending on where you stood, it’s nice to hear their voices knocked down an octave. DoItAll and Funke are still distinctive, but in a way that’s less likely to make people focus on their voice instead of their skills. And skills, they got a lot of.

“Take Dat” is perhaps the perfect example. A sparkling piano loop and a humerous Puff Daddy sample (et tu, Sean Combs?) flip the script as the rhymes make you crack a grin. DoItAll kills this one the most with his verbal linguistics that “cook niggaz in a minute like rice” and chill backstage with a Chinese girl named “Sum Dum Ho” because he’s the “Jim Carrey of this rap shit, makin niggaz laugh”.

There’s a lot to like here. The smooth grooving “Earth, Wind & Fire” with Joya will give you pleasant spine-tingling feelings head to toe, the suprising “One Day” will get you open with a cameo by Chicago’s baddest bitch Da Brat, and the two part “Hennessey” will have you flossing as well or better than Jay-Z and Ma$e. It’s hard to find much to complain about now that the Lords have returned – the only thing that can hold them back from the success they deserve is if the label doesn’t promote this album how they should. There’s something here for the hardcore hip-hoppers, the Top 40 on black radio, AND the people in the clubs. Simply put, The Lords are back to take over!