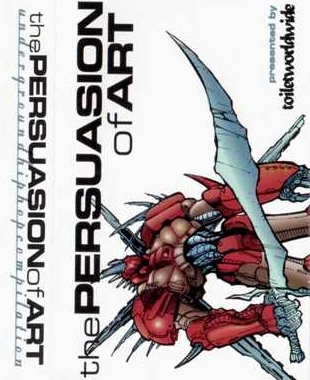 Various Artists :: The Persuasion of Art

Overall, this compilation of LA and Bay Area underground artists is pretty nice. There are quite a few songs that I’m really feeling, its represents some nice peeps you’ve never heard of, at least some I’ve never heard of. But there are also a few cuts that I just had to skip. Lazurus of DisFlex-6 sounds like Eminem, but not as good. The ShapeShifters and da Golden Ray also have cuts on here. Now don’t get me wrong, I’m all for being different and experimentation with sounds and music, but damn yall. You have to at least have a decent flow and make some. With the exception of Radioinactive, LifeRexall and Circus, the ShapeShifters have been hit and miss (mostly miss) with me from the beginning. The sound effects they used were out of place. Being eclectic is one thing, jumbled is another. Some groups are just too abstract for their own good. Either these guys are way ahead of their time and I’m sleepin’, or someone got synthesizer happy. There are also two turntablist tracks that give you a little break from the MCs. Illkuts Crew and Turnstyle made a good effort.

The highlights. “Recognize the Fact” by Daysmen Empire. Bustin’ on unoriginal mainstream Pop-Hop artists who “lack the soul and spirit” with lyrics like: See they make it sound like they created rap/in fact they created wack/in its truest definition/no comprehension/of this foundation/stuck in their own world/jackin’ off to the weak creation/I speak innovation/therefore I seek the innovation. These are peeps I personally will be keeping an eye out for. How can you go wrong with lyrics like that over funky, jazzy, make-your-head-nod beats.

“Everything Goes”, Melancholy Gypsies consists of Eligh and Scarub of the Bay Area’s Living Legends. Perfectly executing the fast-style over slow base line because they are “slaves to the rhythm/prisoners to be.” They say “everything goes according to plan”. Well, if these cats planed to make a very nice cut, I guess they were right.

“In a Minute”, The Earthlings. A hype up-beat track reminiscent of when Hip Hop was about having fun. They come with decent lyrics. They sound like they can get a crowd hype, I’d like to see one of their shows. You should check them out for yourself at www.theearthlings.com. Damn, even their web site is nice.

And last but certainly not least, Ab Rude f/ Lil Aaron blesses the comp with “Our Guide”. You knew he had to spice it up with that reggae vibe with production by none other than Fat Jack. Its introspective, its spiritual, its got a PHAT beat (I think I got whip-lash listening to this). Ab Rudes’ word play never ceases to amaze me.

“I’m up and puffin
was tryin to get my tape to Geffen
too much of a fornicator to be with Virgin
MCA wouldn’t see MC A.B. strapped
Capitol had lower case plans for the whole pack”

This song in itself is a good enough reason to buy the tape.