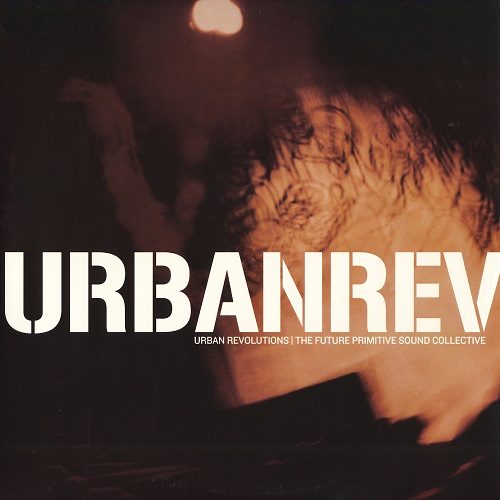 The DJ’s win again with this brand new compilation from the Future Primitive Collective. With the subtitle of “Exploring Progressive Breaks and B-Boy Culture”, this album is definitely not for those simply searching for the next hot breakbeat or cool sample. This is about exploring the world of the beat, with hip hop being the penultimate core.

“Urban Revolutions” highlights some of the best turntable masters out there today, all of whom have gained named for themselves by turning their nerdy love of their parent’s record players into a true musical instrument. Atlanta is represented by DJ Faust & Shortee with the irresistible “Scientific Breakthrough”, while Z-Trip from Phoenix digs more of his uncle’s hidden gems with two songs, “Downtime” and “Further Explorationns Into The Black Hole”.

The funk is explored and dissected with the help of DJ Design and his “Soul Power ’70”, comparable to some of the recent cut-n-paste works by Rehash and Beathoven. Anyone who was a fan of Rob Swift’s turntable jazz experiments on THE ABLIST will get into “Funky Listening”, which takes those experiments one step further.

Some of these songs aren’t just simple two turntable/four turntable journeys into the unknown, a la Invislble Skratch Piklz. A lot of the best songs are well-crafted studio productions, where stylus technology and modern wave forms are merged to create awesome sound landscapes. Thrift store junkies will enjoy the dance funk of “Strudel Strut” by Aromadozesky Therapy featuring Romanowski & Devious Doze. Simply put, it sounds like a day at the thrift store, grabbing random odd records and making them fit to a nice functional piece. The most recognizable sample may be Alvin Cash’s “Twine Time” (think the “ooh aaah, ooh aaa” sample from De La Soul’s “Let Me In”), but everything else is fresh and new for most listeners.

Anyone in for a bit of an endurance test? Mr. Dibbs and Jel sit in with Presage for the 10 minute “Invitation To Hell”, which gets dark as the title suggests with slowed down beats and warm echoes that tend to sound evil when altered from its original state. People come up with names for this type of instrumental hip hop, odd terms like trip-hop, down-tempo, acid-jazz, but it’s all about exploring the beat and making it work more than a standard loop.

Have a feel for hip hip circa 1989? Go back in style with The Bulletproof Space Travelers and “Black Hole”, which sounds like some long lost Bomb Squad remix. The album ends with things in modern times, with the tempo turned up a bit with the drum-n-bass action of “Pelican Exhaust Pipe Wipes” by Phonosycograhdisk & Buckethead. It might not be what most so-called “heads” are listening to, but the creativity of the DJ’s on this album help bring perspective of where this type of music has been, how far it has come, and where it will go.

Mark Herlihy probably didn’t know what to expect when he formed the Future Primitive collective five years ago. Through a small handful of DJ-oriented CD’s (Shortkut vs. Cut Chemist), a 1999 performance of DJ’s using 45 rpm recordings in their sets (the commotion from DJ Shadow and Cut Chemist’s set would lead to the BRAINFREEZE phenomenon), and an overall awareness and acceptance of turntable manipulation, Herlihy can proudly say he did his part to uphold the art of the DJ, however small or big his role may truly be. URBAN REVOLUTIONS brings to mind a phrase by one Buzz Lightyear, for when it comes to further exploration of progressive breaks and b-boy culture, it really does mean “to infinity and beyond”.