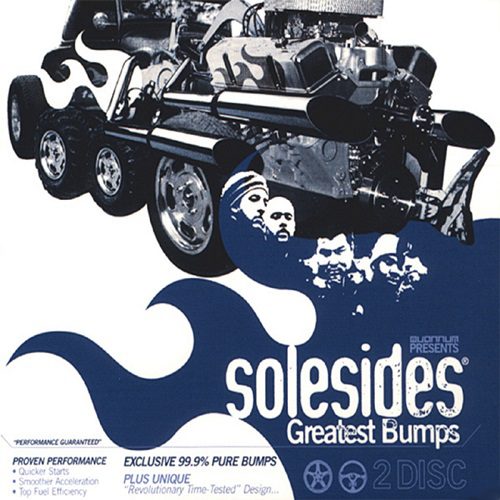 Wait, you’ve never heard of the SoleSides crew? Well there’s probably a good reason for that – they disbanded. Broke up. Finito. It went with a whimper, not a bang. Hold up though! SoleSides is not really finished at all. These hip-hop legends reformed and regrouped as the Quannum Spectrum and continue to carry the torch forward into the 21st century with old favorites and brand new artists. This album on the Quannum Projects label shows that they haven’t forgotten their past at all. In fact, they want to celebrate it and showcase it both for their fans and for the people who slept and didn’t recognize the skills.

This compilation is an ideal harmony between those two groups. The fans won’t be mad at the songs that they already own – they’re just as fat as presented here – and will be pleased by the inclusion of hard to find vinyl mixes and studio session happy accidents. The neophytes who have never heard of rappers like Gift of Gab, Lateef and Lyrics Born get the perfect introduction to why so many people think they’re light years ahead of their time – and hopefully may go out and hunt down a few of their albums to add to the collection after hearing this double disc of dopeness.

Yes, I said double disc – and unlike so many of the two plastic piece sets you’ve probably bought, the $14.99 you’ll shell out on this one is really worth the money. There’s one hundred minutes of incredible shit. The far out computer beats and hard guitar licks of “Say That,” the pro-women anthem “Lady Don’t Tek No,” the lushly lavish “Deep in the Jungle” and the funky shit like “Hardcore (Instrumental) Hip-Hop” – the latter a DJ Shadow cut previously unreleased on CD.

Damn, you never heard of DJ Shadow either? There’s probably not enough space in this one review to delve into the full history of each SoleSides member’s contributions to the world of music, but rest assured they’re not small. Listening to this album should give you a sense of that. In fact, if a list of the most profound hip-hop raps of all time was made Gift of Gab’s lyrics on “Swan Lake” and Lyrics Born’s solo joint “Balcony Beach” would probably rank number one and number two. The latter is a journey of self-discovery rarely seen on wax – instead of travelling to magnificent galaxies, Lyrics Born travels deep into himself.

“See, this is beyond my threshold
I’m accustomed to just a conventional struggle
With two opponents
Only here the tussle’s between you and the truth
So ultimately I’m gonna lose
Actually I gain though
I gotta be honest with myself, or else
I impede my personal progress
I think it’s better to be depressed for a minute
Admit it, and get re-oriented
Instead of being a bitter cynic isn’t it?”

Don’t presume on the basis of these lyrics that everything the SoleSides crew did was serious. In fact, the greatest thing about this album is that it preserves the zany and humerous braggadocio and stylings of the whole fan-damily on cuts like “Freestyle Rapping” recorded live at Barony Place. The dopest though may be “Lateef’s Freestyle” where he gets incredibly hyped up and irate over the Goodie Mob “Cell Therapy” beat – a moment of brilliance now preserved for all time. There’s so much dopeness it’s hard to comprehend it all in one sitting but by the time you reach the unreleased SoleSides cut “Blue Flames” at the near end of disc two (there’s a bonus track) you’ll realize you’ve been on an incredible musical journey. Andre Benjamin said recently on the song “Humble Mumble” that he made a reporter shit her drawers because she thought hip-hop was only guns and alcohol. Said reporter would need an EXTRA HEAVY DUTY pair of Pampers after checking out the “Greatest Bumps” of the SoleSides crew – they’ll shake the cobwebs of your out of place and let the Cali sun shine right on in!