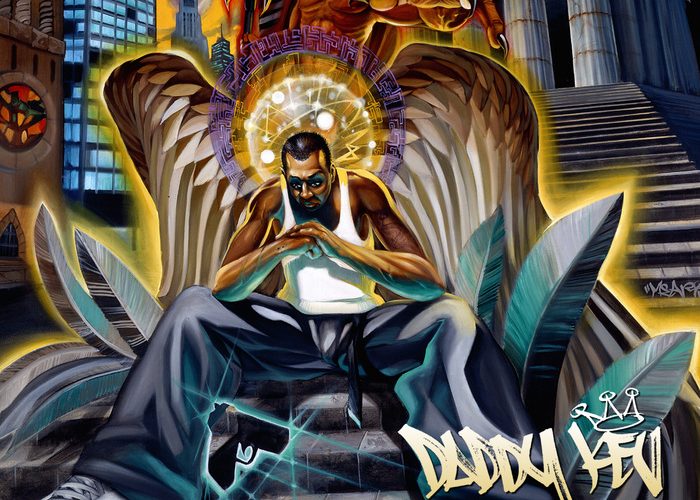 Trippy. Experimental. Abstract. Funky. All of these words could be accurately used to describe beatsmith Daddy Kev. While 9 out of 10 cats making tracks are trying to sound like DJ Premier or Dr. Dre, Kev is on some shit that makes you think he’s hitting acid tabs and eating hash brownies. And when the mind behind the music is that far out there, it’s only right that for his “Lost Angels” E.P. he hook up with some rappers on that next shit too: West coast veterans like the Busdriver, Circus, Awol One, Mikah 9 and P.E.A.C.E.. Looking at this compilation, the only innovative/freaked-out rappers that seem to be missing are Aceyalone, Del, and Volume 10.

Of course, the risk of being ahead of the curve is that sometimes you can leave the rest of the pack too far behind. Such was the reaction of a fellow listener when I played “First Things Last” by Mikah 9 as she remarked, “If I have to hear a chromatic scale over again one more time, I’m gonna throw up.” I don’t think she really caught on to how phenomenal 9’s flow was on the track, or the fact that no other producer had ever tried to have an MC rap over a series of chromatic scales. What to one head sounded incredibly advanced and creative struck another as repetitive and banal.

There are a couple of tracks that come a little closer to a traditional sound for the neuromantically impaired. P.E.A.C.E. goes the Jesus route and declares he is lyrically “Walking On Water.” Daddy Kev’s beat is rather uncomplicated here, but it allows P.E.A.C.E. to completely dominate the track and attack with lines like “Don’t you ever use no _Matrix_ type of shit/ on me, Star Wars, Yoda’ll get ya.” If you get the feeling from this track you just walked into a hip-hop coffeehouse poetry slam, you probably got the right idea. Awol One’s “Lick Me I’m Famous” might be the most traditional cut of them all, where the raspy voiced one alternately brags about AND deprecates on himself and others over a fat snappy bassline. If you already knew and liked his work with Daddy Kev on the “Souldoubt” album, this will be right up your alley.

Ultimately how you take this album will depend on your ability to comprehend and/or relate to some really dusted-ass rap music. The rap by Circus on “This Stuff’s Really Wacko” comes across as kin to a non-stop adventure in free association. This track either succeeds or is hindered by it’s re-usage of an old Compton’s Most Wanted track, but if you ever heard “Def Wish II” you will be getting flashbacks. Busdriver’s “Blowed Anthem” is definitely not for rap listeners who’ve been trained to expect a consistant rhythm of flow diction or ABAB rhyme/punchline formats (think Ludacris). For this reviewer it’s a pleasant trip down the light fantastic, but a few points are deducted from Daddy Kev’s E.P. for beats that while functional actually seem to be less than up to his true potential. If you do pick this album up, take two hits and call me in the morning.