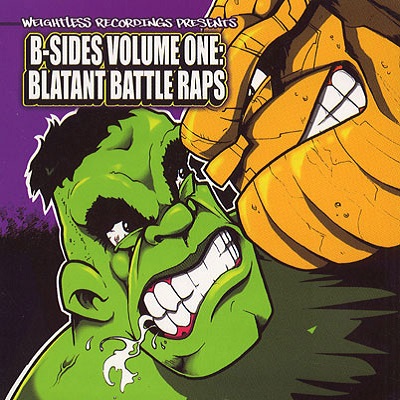 Straight out of the vaults of Weightless Recordings, this brand new album is a self-described compilation of various songs that are either from projects that got scrapped or didn’t find an appropriate venue on CD’s that did reach the public. At twenty-eight tracks and seventy-two minutes long, it’s no wonder that they decided to call this release “Volume One” – with that much in the vaults it’s almost certain there MUST be more!

There are a lot of gems on this collection, but the one that most immediately commands attention is “The 3rd Degree” by Illogic and Greenhouse Effect. Without knowing who 3rd Eye is (other than they may have performed on the same stage at the Columbus Hip-Hop Expo in ’99) I can honestly say that WHATEVER they said about the Weightless crew as a diss was obviously a BIG mistake. I’ve heard some venomous replies and battle rhymes before, from Canibus to Kool Moe Dee, but this may be in the all-time top ten. Just peep Illogic’s verse, and this is only the START of the song:

“Y’all fell from the first floor, but claim to elevate
with a CD that sounds like a Swizz Beatz mixtape
From a battle background, but won’t step in the ring to swing words
You’d rather chill with your crew of herbs and sing ballads
I left 3rd and with me came the talent
Seem your confidence and skill level are vaguely out of balance”

Whoo! The shit will leave your ears feeling pleasantly scorched. There’s plenty more to check for on this compilation though, such as the epic seven minute long “Pen Relays” featuring Vast Aire of Cannibal Ox, among many others. The “In Sync (Scientific Remix)” has nothing to do with singing boy bands, unless they suddenly went underground with ten times the skills of P. Diddy. If your mind is unprepared for the dope rap trio of Blueprint, Metro, and Illogic you’d better not open up “Pandora’s Box” either.

Beats are expertly handled throughout with 90% of the cuts either being laced by Blueprint or True Skills, with the aforementioned “Pen Relays” produced by Cryptic One being a rare exception. Tracks 21 through 27 are actually chapters of an extended “Time Travel Radio” freestyle, broken up by track for each rhymer that spits a verse. Throughout the album songs are seperated by short 15-20 seconds spontaneous raps – interludes which are a welcome relief from wack skits but ultimately just as unnecessary. At the end of all this, you’re even treated to an excellent Weightless Recordings bonus track entitled “Sunrise” – say WORD.

By this point in the review, some of you may have been scratching your heads and saying out loud, “Who the fuck is Weightless Recordings anyway?” Your confusion is understandable, since all too unfortunately great albums like the Illogic LP “Illogic: Unforeseen Shadows” and the Greenhouse Effect “Up to Speed” EP have gone unheard by far too many ears drowning in a sea of commercial rap and mediocrity. Getting a late pass may be necessary to appreciate the incredible value of getting a second chance to hear these songs, but once you do you’ll realize “B-Sides Volume One” offers a collection of good beats and great rhymes shining from Ohio. Peeping their catalogue is highly recommended.