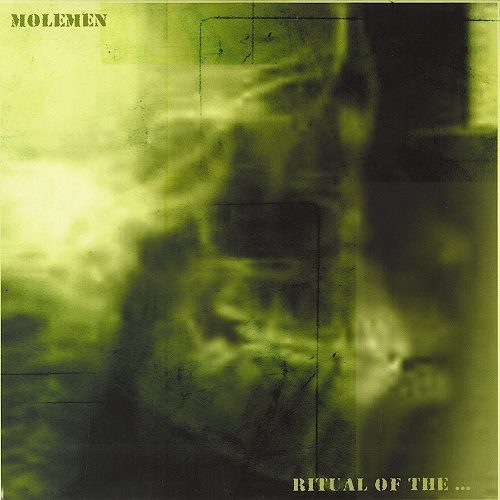 Molemen :: Ritual of the…

For being the third largest city in this great country of ours, it’s dissapointing and amazing that Chicago hasn’t spawned much notable hip-hop talent. If you ask your average hip-hopper to name three emcees from the windy city, far too many of them probably wouldn’t get past Common, and those remaining probably wouldn’t have anything after Juice. (Most people probably think Common’s from NYC anyways.) Of course, listening to this album, it’s definately not for lack of talent. So what’s to blame? Unification; everyone’s got a crew these days, and having a crew is the best way to get your name out there. Getting noticed is all based on associations; how many records have been sold recently simply on the strength of a Madlib beat or, say, a guest verse by Evidence or Pep Love? How much did AZ blow up by spitting on “Life’s A Bitch”?

Memo, His-Panik and PNS are probably the best production team in Chicago and they do their best to rep their city by filling the roster with primarily Chicago artists. The regulars are here; Juice, Rubberroom and Vakill make their appearances more than a few times. Content-wise, the locals don’t come too original, relying on punchlines or slightly thugged battle raps but that’s not necessarily a bad thing. Common is absent (not surprisingly), but on “Taste of Chicago,” E.C. Illa does his best impression. Honestly, he’s hardly missed anyways. Although Juice’s “Reign” isn’t really all that good, the lesser known punchliner Matlock rips the fuck out of some creepy shit on “Get Outta Dodge.” Of all the natives, Rhymefest (who I think was mentioned in William Wimsat’s ‘No More Prisons’) and Vakill shine the brightest here. Both kill “Keep the Fame,” with Rhymefest spitting ‘I’d let you crew suck my dick, but they’d bite it/they recite my comings.’

But it’s clear that “Ritual of…” isn’t supposed to be Chicago’s breakout posse album, because if it was, the dopest tracks on here wouldn’t be emcees from elsewhere. Vakill, Juice, etc. all have punchlines for days, but C-Rayz Walz easily drops the best battle verse on the album on “Challenge Me.” Here’s just a taste:

“One of the illest things you can think
like Sisqo slapping Mike Tyson with a pink glove
I know you fucked up
you shouldn’t even drop acapellas
just cuz you smoke crack, that don’t make you down with Roc-A-Fella”

With Mr. Metaphor (ex-Brooklyn Academy) and Breez Evaflowin (Stronghold) also spitting hot shit, this track is probably one of the best to drop this year. The Chicago emcees kept their content to a minimum, while tracks by Slug, Sebutones and even Rasco all carry themes. Slug is on point; to say nothing of the loosely video-game based “Put Your Quarters Up” which also has MF Doom and Aesop Rock, “How I Won the War” puts a tale of draft-dodging up against the best beat on the album.

If not aiming to show the world what’s up with Chicago, Molemen at least come through with proof of their talent behind the boards. As well as being on point with almost every beat on here, the crew definately knows how to produce for a track or for an emcee. For “How I Won the War,” PNS laces Slug with some floating spacy shit for his weird story-telling. His-Panik’s creepy-ass beat on “Get Outta Dodge” fits Matlock (“lookin creepy on the CTA and getting off at your stop”) perfectly. Memo’s stuttering licks on “Unbreakable” line up with Prime’s battle tactics perfectly. The only complaint here is the minute-long tracks each producer drops without an emcee; Memo’s “NHB” is wasted.