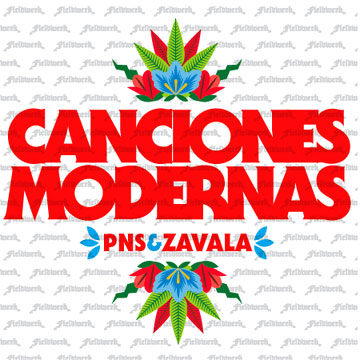 Today’s abundance of beatmakers producing only instrumental hip-hop encompasses a broad range of incredibly solid, nuanced music. Madlib brings the warmth Dilla brought to his instrumental records, wrapping his music in his own hazy style. Prefuse 73 chops up his samples and mixes them with electronic beats to create frenzied concoctions. Blue Sky Black Death brought a symphonic approach to hip-hop, on their work “Late Night Cinema” creating instrumentals that swelled and receded in masterful ways. The list goes on and on.

Into this subgenre come PNS and Zavala, two Chicago producers who have joined forces to release the ten-track instrumental album “Canciones Nuevas.” Each artist contributes five songs: PNS has the first five with Zavala rounding out the second half of the album.

Even with the two producers handling their respective halves of the album, length is an issue in this project. By industry standards, it’s painfully short as a full-length LP. So listeners have to wonder whether it is meant to gain exposure and hype for these two artists, or whether it was meant to be considered a final, polished product. If the listener is being told it’s the latter, it’s hard to see how this album stands on its own merit. Though each track is built off of a solid musical idea, most end up hampered by a lack of inventiveness and imagination, and fail to develop past their original ideas.

Beginning the album is PNS with his track “2012,” with synthesized strings playing dark, apocalyptic music over a looped drum beat and the occasional sample pleading: “It’s over. Run for your lives.” The next track, “Nueva Frontera,” features a classical guitar flowing over a looped drum beat. “Prelude to Audiotronics” is one synthesizer riff looped twice. It’s boring to read about, and after a couple of listens, the tracks sound as tired as their descriptions. The last two tracks of PNS’s side salvage something for the listener. “Lenky Di Don” samples a native chant over an organ and “Retina of the Mind’s Eye” is a peaceful keyboard running over some wind instruments. The two cuts are not masterpieces, but the listener finally arrives at something that is musically interesting.

After five tracks, the simplistic productions of PNS give way to Zavala’s more intricate cuts. Zavala delivers more interesting choices in terms of samples, and is able to layer the elements of his tracks in complex ways without becoming overly elaborate. On the second half of the albums, tracks stand better on their own, and don’t leave the listener with the impression that a vocal track is missing.

First for Zavala is “The City Is Mine,” on which over a racing drum beat and vocal samples, the producer builds a track that grows and changes over three minutes. On the tail end, Zavala replays the first piece of the instrumental, but at a severely slowed-down pace, a trick that makes the track more interesting for the listener (Zavala uses it again on “Devon Ave”) and adds a sonic layer to the album. Another standout on Zavala’s side is “Mal Momento,” a three-minute cut that utilizes bongos, handclaps, and a saxophone, evoking the feeling of a hot summer night on a city street.

In the first half of the album, the shortage of creative ideas from PNS is obvious, especially without any vocals to add texture to the tracks. Perhaps these are just dance tracks meant for clubs and parties, but if that is the case, it still does not excuse the over-simplicity of PNS’s tracks compared to Zavala’s, whose cuts don’t transform the album into something incredible, but at least make the music enjoyable over repeated listens. Overall, the album feels unbalanced, lacking in artistic direction, and though it has its moments, it is not a work that will leave much of a lasting impression on listeners.