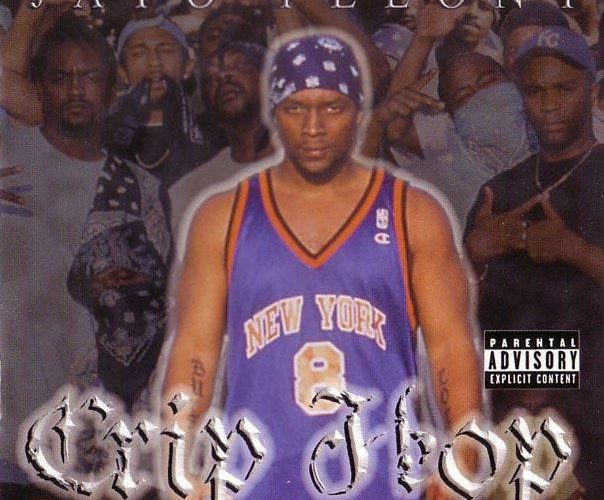 Clearly one of the “other cats” who received only “half a bar” in Jay-Z’s “Takeover”, San Diego representative Jayo Felony aims to take a few more shots at the industry with his independently released “Crip Hop”. To tell the truth, by now I’m sceptic when West coast rappers try to beef with their East coast counterparts. Especially if someone has worked with Run-D.M.C.’s Jam-Master Jay on his debut and had an album out on Def Jam just a few years ago. But this here is different. Jayo Felony has unmistakably stated what makes him mad: rappers whose personal background is no indication to the fact that they might have been gang members, yet they suddenly start to juggle with gang terms and signs. In fact, Jayo spoke against the exploitation of gang culture as far back as 1995 when he rhymed on South Central Cartel’s “Sowhatusayin” (from “The Show” soundtrack): “Fuck Oliver Stone, he made ‘Colors’ / gettin’ paid off gangbangin’, I want my money, muthafucka.” He’s so persistent about this he even reminded those that “started bangin’ after ‘Colors’ was made” in the Eastsidaz’ “Got Beef”, more than a decade after the movie stirred up controversy. But with something as closely associated with a certain gang as the ‘c-walk’ being popularized through music videos and rappers claiming colors one minute and acting colorblind the next, some people are bound to be upset. Now this is very shaky territory to argue on. First, Jayo Felony and others of his ilk could be accused of doing the same thing: profiting from young people’s fascination with gangs. That’s not even considering that these rappers often do nothing more than stereotype the gang system into being some type of cutthroat society whose only aim is to accumulate an enormous bodycount as if it was some stupid video game. Secondly, the line between rappers and gangbangers has been so blurred by rappers making gang references and the fuzzy ‘gangsta rap’ term that it’s hard to make out who’s real and who’s not, while some don’t see the two mix period. To simplify all this, let me say that all Jayo does with this “Crip Hop” invention of his is following suit. He has never tried to hide his gang affiliation – although he didn’t wear it on his sleeve on his Def Jam-assisted aim at stardom, “Whatcha Gonna Do” (’98) as much as he did on his “Take A Ride” debut (’95). While the listener is generally left in limbo about the ‘realness’ of a rapper, I think it is safe to say that Jayo Felony is a San Diego Crip holding on to his blue rag that others started to wear for mere fashion purpose.

The album follows the buzz created by the song “Trued Up” off Henchmen Entertainment’s “Bullet Proof Love, Vol. 1” compilation. According to Jayo, he initially was appalled by Jay-Z’s intro to “Streets Is Talkin'”, in which S. Carter mocks the general curiosity about his person with: “Is he a Blood, is he Crip? / Is he that, is he this?” Another one of his often subtle statements reads: “I wear more bling to The Source and Soul Trains / more chains than rings, niggas won’t do a thing” (from “Change The Game”). Jayo took that as disrespect towards West coast gangs who are rumored to have robbed several celebrities when the Source and the Soul Train Music Awards were being held in L.A. If you let Jayo tell it, Jay-Z intervened at Def Jam to stop the song from being released, helping to estrange Jayo even more from his former label. Consequently Def Jam did not release the scheduled “Hotta Than Fish Grease” album but let Jayo go, who took the songs he had already recorded and added some new ones. For “Crip Hop” the song in question was remixed and rearranged lyrically, adding an interesting twist to it by including someone called Baby Skar to rep for the Bloods and take on the Roc’s second row, and by replacing Jayo’s third verse with much more potent lines:

“Back in the day if I was Kane, cuz, I woulda been trippin’
like, ain’t – no – half – crippin’
when it comes to this c shit they gon’ learn out here
I have Al Sharpton c-walkin’ in his perm out here
Niggas bangin’ in NY now? Cuz, I don’t knock it
This fool said he was a Blood but had his rag in the wrong pocket
Crips wear it on the left and Damus wear it on the right
I’ma show you muthafuckas how to gangbang right
ride back on the same night; how to sling caine right
how to keep them guns hot and aim them thangs right
while your DJ gettin’ slumped at the breakbeat spot
I’m smokin’ purple to my lungs like Grape Street Watts
c-walk on your roof, it’s over before you hit the vocal booth
Watch out! I threw up the hood and broke your tooth
Put a straight jacket on me, cuz, I’m throwin’ a tantrum
and all the Crips across the world, y’all gon’ sing this anthem”

I’m not going to take sides here, but I can see Jayo Felony’s motivation goes a little deeper than just a clever marketing move in an attempt to ride Jay-Z’s coattail towards success. The “Intro”, which possibly hints at Daz and Kurupt who linked up with Roc-A-Fella recently, makes it clear that in this gangland there is such a thing as being ‘guilty by association’. Another diss song on “Crip Hop” deals with Snoop though. Apparently Jayo claims ownership of the term ‘Crip Hop’, and is thus upset by the Eastsidaz song “Crip Hop” (from their recently released second album, also on the ‘Baby Boy’ soundtrack). While Snoop gets served in “You’s A Character”, Jayo Felony already sees himself as the last gang-rapper standing: “Fashion gangbangers look the part, but cannot play the role / when it’s all said and done I’ma be left with these streets in my soul.” “C Walk & Skip” is much more scathing, though I’m not sure if this too is directed towards Snoop (it mentions DJ Clue). What I do know is that “Hurt That Nigga” with Soopafly behind the boards and on the mic is extremely exciting without naming any names. While I’m at it, I have to mention one more diss song, this one again aimed at the self-proclaimed God MC. “Catch ‘Em In The Mornin'” fails, however, to hit Jigga where it would hurt, as I’m beginning to think that maybe Jay-Z was right to dismiss this San Diego local with said “half a bar”: “You can sign Daz and Kurupt, I’m still gon’ bust on yo ass / you better tell Jay-Z I’ll catch him in the mornin’ / Loco Records shippin’ platinum, Roc-A-Fella is gone then”? I don’t think so.

Thankfully Jayo manages to get his mind off these two superstars for the rest of the album. Some of it is still superfluous. What is Spice 1 doing on a song called “Gang Bangin Shit”, for instance? “One Shot Kill” is gangsta shit so generic those responsible for it should be locked up. In “What Ya Need” he’s the umpteenth rapper to bite Rakim’s ‘7 MC’s’ rhyme. Plus this song must be rather old with his “blow up like the Olympics” line that recquired a memory scan on my part to even get what he’s talking about. The pimp stroll he excercises with E-40 in “Please Believe It” is tired like a hooker in the morning and “Sherm Sticc 111” has him once again abusing his drug of choice.

But let’s get to the good part. “Girlz & Boyz” has him discussing the handling of cocaine (girls) and heroin (boys) with New York rapper Tiggi Diamonds over an atmospheric Battle Cat beat. One thing is for sure: he flows much better when he slows things a bit down. While lyrically the album is only slightly above average, Jayo shows he isn’t just a rappin’ gangbanger but a rapper that seeks mic control (as in M.C.). A good example would be “Swing”, which is full of ragga references delivered in quite a few rhyme styles. It would be easy to label Jayo Felony more of a vocalist than a lyricist, but “Hotta Than Fish Grease” tells a different story. Over a disjointed beat by DJ Silk (of “Whatcha Gonna Do” fame) and accompanied by Young Crook of his DuLow Gang, he’s doing a different kind of trippin’: “We all get green when I come on the scene / I’m a stone-cold Diego rappin’ machine / this is out of space so you know you can’t fade us / in my boxers and Chuck Taylors / and my mission is to knock them boots / c-walkin’ on the moon without my spacesuit / (…) / To all little kids we lost like Elmo / Is it over? Hell no / Rain, sleet, snow / Now we takin’ rap all the way to Pluto / I got aliens bangin’ DuLow cause this DuLow / and they got greenery that we can all blow.” That’s some spaced out stuff. The DuLow Gang, apparently a collective of Crips +and+ Bloods, also shows up in “Game Round”, an extremely tight posse cut whose sung hook and moody beat give it that extra touch.

Rounding out Jayo Felony’s surpisingly personal collection of songs are his joints for the ladies, which are both exceptional in their own way. The closing “She Loves Me” is the type of club track I’d like to hear more often, as it throws just about everything in the mix topic-wise and tops it off with a catchy “she loves me – not” hook. “Do You Love Life” is neither a simple love song nor a played out ‘Bonnie & Clyde’ theme, but a gesture of appreciation towards the woman in his life. In conclusion, “Crip Hop” is not overshadowed by the drama (which will be soon forgotten), but it’s not the album that will make Jayo Felony the West coast rapper to listen to either.