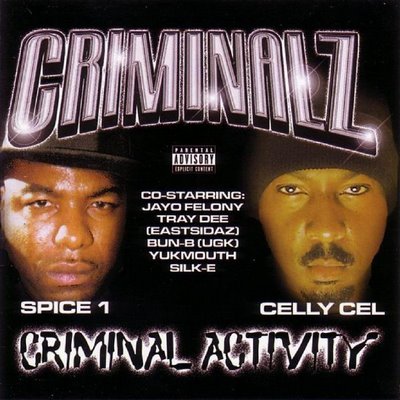 Who said only mainstream acts and major labels blow things out of proportion? When Celly Cel’s Realside Records and distributor Bayside Entertainment announced the West Coast supergroup Criminalz, it just had to be “the hardest group since N.W.A & the Geto Boys.” Now Celly Cel, Spice 1 and Jayo Felony are, at least on the mic, far from soft. But “the hardest group since N.W.A and the Geto Boys”? Does that mean they’re just as good as the groups mentioned? Or only just as hard? This is not the place to discuss what exactly made N.W.A and the Geto Boys great, but I have one word for you: originality. It’s what sets you apart from the rest, what will have you remembered.

Although none of the three members of the Criminalz strayed too far from the litter, they still were easily its pick when they were new to the game. Celly Cel, Spice 1 and Jayo Felony originally all came original, so there was indeed some hope that this Criminalz project despite its highly unimaginative name would meet the standard set by their desperate promotions department. Promotion-wise however, the whole project caught a blow when for some reason Jayo Felony had to drop out of the line-up. He’s still on 7 out of 10 cuts, but he’s not on the cover. Given these circumstances, I doubt that the Criminalz will be touring together, record a follow-up or do any of the things groups usually do.

But with the experience of at least a dozen solo albums combined they should be able to get it crackin’, right? That’s what I also thought. But when Celly uses a familiar E-40 routine to set up “Criminal Activity” with the short title track and the next song opens up with the famous chorus of 2Pac’s “Ambitionz Az A Ridah”, it’s already curtains as far as originality goes. “Ridaz” is nothing more than mass-produced g shit, down to the disjointed track. As expected Jayo Felony brings a little more heat than the other two, but even he does not sound like his usual blood-boiling self. And whatever happened to the Spice 1 of old? The album is not all filler, there is some meat (but no beef), like Doyle’s keyboard-kaleidoscope “Puttin’ In Work” that helps the rappers snap out of their trance. Underground King Bun B does a good job of substituting Jayo in “Niggaz Like Us”, as does Silk-E in “Doin’ it Big”.

But as far as content and rhyme styles go, we’ve heard it all before. And often better. The lead single “My Life” should get a honorary mention. Jayo takes out the opportunity to promote his ‘crip hop’, but at the same time sends out a fair warning, Spice tells people to keep their head up and keep striving and Celly reflects on his own dangerous lifestyle while singer Joi Patrice injects the song with emotions of regret and resignation. “The Real World” is too over-dramatized to make any valid statement in the real/fake debate, but with the heart-wrenching “Reminisce” – that has them reminiscing over lost loved ones – the Criminalz have found a way to tap into the real world. Count “What They Hittin’ Fo?” and “Rollin’ Wit’ My Folks” in, but it’s hard to leave a lasting impression if you’re going in after a winner like “Reminisce”.

Most rap groups who made great albums needed guidance to make those great albums. The Criminalz definitely lack a mastermind to weld the three of them together and make them realize their synergies. Every single verse here is spit by the respective rapper only. There are almost no ad-libs, there’s no interacting, it might as well be that these three never were in the same studio together. A collaboration project won’t make you a ‘group’. As much as I like it when different voices come together, I see absolutely no point in this album. What’s worse, that’s what it sounds like when (gangsta) rap has become your day job and that day job isn’t really that fun and fulfilling anymore. That’s how lame this album is.