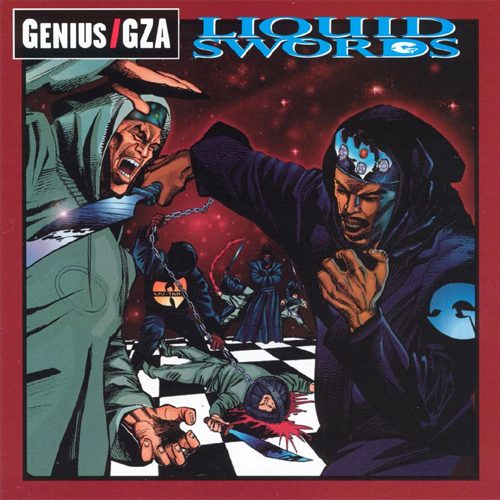 Gary Grice is an enigma to the hip-hop world. Early in the 1990’s many people misinterpreted the loquacious lyricist as just another lascivious lounge lizard; a pseudo-Father MC or second rate James Todd Smith trying to pitch woo to ladies with songs like “Come Do Me.” They couldn’t have been further from the truth, but the aptly titled “Words From the Genius” only hinted at his true potential due to a spartan amount of quality beats to rip and his relative newcomer status in rap.

After linking up with the former Prince Rakeem and changing their names to GZA and RZA respectively, these two industry spurned MC’s traded in pop hooks and GQ looks for the hardcore shit they wanted to do all along – and THANK GOD THEY DID. Wu-Tang Clan’s “Enter the Wu-Tang (36 Chambers)” was the result – an all-star team of New York MC’s they assembled who were hungry to rip mics and shock the world with their dopeness. This was only the first surprise that this new Clan had in store for us. Solo albums from Clan members started to come on various labels, thanks to the unprecedented deal the group inked basically allowing their membership to freelance anywhere they wanted.

Geffen Records wisely chose to ink GZA for his solo album, after his stellar lyricism on “36 Chambers” had created a buzz for him in the industry that he never got as the Genius. In his metamorphosis from Genius to GZA, Mr. Grice actually succeeded in making his original name MORE apt by impressing fellow artists and hip-hop fans alike with the depth and cleverness of his rhymes. Wisely, Geffen chose to bill his solo debut “Liquid Swords” under BOTH names – implying both his mental prowess and his association with the now famous Wu-Tang Clan in one fell swoop. The membership of the Clan didn’t dissapoint either: RZA produced the entire album sans one track and each group member appeared on at least one song. Clearly this was a product of the Clan; at the same time it was finally time for Gary Grice to get the shine he had for so long been unfairly denied.

From the album’s introduction onward, we learn just how serious the task before GZA is. Up until this point a lot of the Clan’s samples from Kung-Fu movies had a somewhat comical or campy value, but on “Liquid Swords” they’re downright creepy as fuck. Over an ominous backdrop, you hear the voice of a little boy narrating his father’s story – how he was a great and ruthless samurai who decapitated of 131 Lords. This sets up the opening title track nicely, where a ruthless GZA dissects his competitors with pure malice for their lyrical weakness:

“I’m on a Mission, that niggaz say is Impossible
But when I swing my swords they all choppable
I be the body dropper, the heartbeat stopper
Child educator, plus head amputator
Cause niggaz styles are old like Mark 5 sneakers
Lyrics are weak, like clock radio speakers
Don’t even stop in my station and attack
while your plan failed, hit the rail, like Amtrak”

If you had any sliver of doubt left after this song, “Duel of the Iron Mic” quickly erases it. Over what just may be the MOST menacing sounding piano loop in hip-hop history and a pulsating bassline, GZA flips an attack that could even put anthrax to shame in deadliness:

“Yo; picture bloodbaths in elevator shafts
Like these murderous rhymes typed from genuine craft
Check the print, it’s where veterans spark the letterings
Slow moving MC’s is waitin for the editin
The liquid soluble that made up the chemistry
A gaseous element, that burned down your ministry
Herbal vapors, and biblical papers
Smokin Exodus, every square yard is plush
Fuck the screw-faced photo sessions facial expression
leaves impressions, try to keep a shark nigga guessin”

With able assistance on the second and third verses by Masta Killa and Inspectah Deck, with crazy-ass Ol’ Dirty Bastard screaming “Duel of the Iron Mic! It’s that fifty-two fatal strikes!” as a chorus of sorts, this song was and IS a hip-hop classic. At this point the album is only two tracks deep, but the shit keeps on getting better and better. “Living in the World Today” can be summed up by a few simple words from GZA himself: “Now who can ever say they heard of this? My motherfuckin style is mad murderous.” Alliteration is far from the only weapon this Genius can wield though – “Gold” shows off his talent for wielding metaphor. Not similies; which is what you’re used to hearing from MC’s who “drop bombs like the World Trade center” or who say they’re “heavy as a Chevy” (the hint for you should be the words “is” and “like”) but ACTUAL metaphorical reflection. What is “Gold” to the GZA? In the song it has double meaning – it’s the dope on the streets to a drug dealer, but it’s also the ill-gotten profits to be made from the slang and bang. Unlike some of his contemporaries though GZA is not out to glorify this practice – his song presents it for the brutal endeavor it is:

“His glock clicks, like high-heeled shoes on parquay floors
Mad sick, stand on hills and invade wars
Filthy foul, shoveling dirt, he’s out to hurt
For instance, he’d chop off hands who tapped work
His idols would lock down airports and extort
some import, catchin ten percent of what the fiends snort
Up in the ski resorts, up in hills
They move ki’s and had the skis making drops on snowmobiles
The plan was to expand, catch seven figures, release triggers
And live large and bigger than my nigga
Who promised his moms a mansion with mad rooms
She died, and he still put a hundred grand in her tomb
Open wounds, he hid behind closed doors
And still organized his crime and drug wars”

What follows is another certified hip-hop classic – the even grittier and more surreal “Cold World” which would later be blessed with a remix featuring D’Angelo on the hook. The version on the album though is the classic, as a staggered RZA beat moves up and down a simple musical variation hiding complex depths: a strong bassline, an ominous storm howling in the background, crispy drums and hi-hats, and even occasional plucked guitars echoing eeriley into the background. The instrumental alone is a Wu-banger, but when hearing Inspectah Deck provide the guest verse following GZA’s it not only solidifies the dopeness of the cut but damn near upstages GZA’s reputation as the tightest lyricist in the Clan:

“Some niggaz in the jet black Gallant
Shot up the Chinese resteraunt, for this kid named Lamont
I thought he was dead but instead he missed a kid
and hit a twelve year old girl in the head and then fled
Tactical narcotic, task force, back off fast
Cause the crime boss is passin off cash
Extortions, for portions of streets, causes beef
Havin followers of Indians trying to play Chief
You witness the saga, casualties and drama
Life is a script, I’m not a actor but the author
of a modern day opera, where the main character
is presidential papers, the dominant, factor”

Not to worry though, the Genius returns strong on the following track “Labels” – an entire song full of references to the record industry which starts out with the venemous barb, “+Tommy+ ain’t my motherfuckin +Boy+; when you fake moves on a nigga you employ” and only proceeds to get more +Ruthless+ throughout – only Geffen escapes his fierce wrath. Afterwards the raw verbal assaults of Killah Priest, RZA, and Ghostface Killah share the spotlight with GZA on “4th Chamber.” Built on a track which was heavy metal and headbanging long Limp Bizkit became trendy, the track bubbles over with the supreme confidence only a crew of rappers sitting on top of the world could possibly have. Just peep the boastful and disdainful lyricism of Killah Priest as an example:

“I’m overwhelmed, as my mind roams the realm
My eye’s the vision, memory is the film
Others act sub-tile, but they fragile above clouds
They act wild and couldn’t budge a crowd
No matter how loud they get, though they growl and spit
Clutch they fists, and throw up signs like a Crip
And throw all types of fits
I leave ’em split, like ass cheeks and ragged pussy lips”

As if this wasn’t enough, and as if this album wasn’t every hardcore hip-hop motherfucker’s wet dream come true already, the following track “Shadowboxin'” may be the icing on the proverbial cake – an all out assault on conventional rhyming with the incredible tag-team duo of Method Man and GZA trying to one-up each other with flows that bust up the snot-nosed. The simplicity of the track and the scratched in Kung-Fu sample hook strip the song down to it’s bare essentials like a Rick Rubin reduction, and neither MC avoids the opportunity to shine brightly in the spotlight. For my money I can’t pick a best verse or MC in this song, but this particular selection by GZA shows off his skills to the highest degree:

“I slayed MC’s back in the rec room era
My style broke motherfuckin backs like Ken Patera
Most rap niggaz came loud but unheard
Once I pulled out, round ’em off to the nearest third
Check these non-visual niggaz, with tapes and a portrait
Flood the seminar, tryin to orbit this corporate
indsutry, but what them niggaz can’t see
must break through like the Wu, unexpectedly
‘Protect Ya Neck’, my sword still remain imperial
Before I blast the mic, RZA scratch off the serial We reign all year ’round from June to June While niggaz bite immediately if not soon”

Say WORD. And you’ll continue to say it again and again with gritty narratives like “Killa Hills 10304” and the all-star collabo’ “Investigative Reports” with U-God, Raekwon the Chef and Ghostface all dropping gems. Round out the album with the hardcore slice’n’dice of “Swordsman”, the sonic thump of “I Gotcha Back” and the bonus track “B.I.B.L.E. (Basic Instructions Before Leaving Earth)” by Killah Priest and you have an album of 100% Wu-Tang sonic mastery. A lot of good Wu-Tang Clan albums have been released over the years, both collectively and individually, but out of all the solo albums this may be the best – if not one of the top two or three. For me anyway it’s the purest representation of the Wu-Tang sound and style at a time when they truly reigned over all others in hip-hop in the mid-90’s, and Gary Grice a.k.a. Genius a.k.a. The GZA was the master architect of lyrical intelligence and fury – a “Microphone Fiend” on par with even the legendary Rakim. Other solo albums GZA albums have failed to recapture this raw power, and I’m still left wondering why when I hear him blaze legendary verses every Wu album that he’s on. Maybe someday, we will see the return of the Liquid Swords – and MC’s better hold on to their necks or fear decapitation if we do!