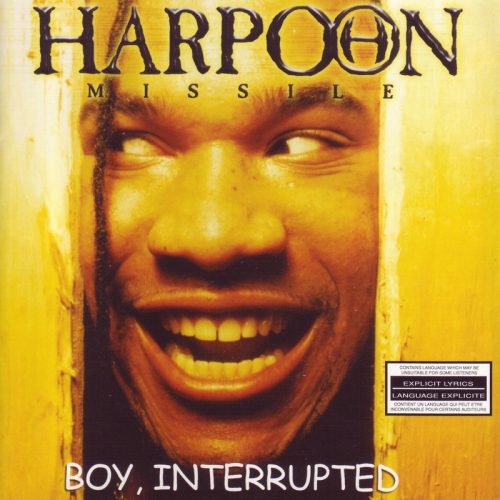 By naming their album after the Wynona Rider/Angelina Jolie movie, “Girl, Interrupted”, Harpoon Missile have made a conscious decision to let prospective listeners know what they’re getting themselves into. Harpoon, the group’s MC, said on a recent TV interview something to the effect of, “I’m like that movie. I’m coming straight out the mental hospital on this album.” Listening to “Boy, Interrupted”, I for one do not doubt Harpoon’s word. He comes across INSANE on the album. Scary insane too, like an escaped convict or something. And don’t expect any Whoopi Goldbergs to be showing up as good-natured counselors here, either. This record is full of hard-core ultra-violence and it’s not stopping for anyone. You’ve got two choices: shut up and listen or get the HELL out of the way, because these boys are not stepping lightly.

If you ever get the chance, though, let me suggest you choose option 1. Harpoon Missile have been together for 11 years now, and although this is their debut album, their experience definitely shows. I can’t remember the last time I’ve heard such a confident-sounding debut. Harpoon, as an MC, has got one of the most apocalyptic, aggressive voices I’ve ever heard. Put simply, after hearing him rap, I would NOT fuck with this man. He literally sounds like some kind of demonic beast, and it works. The production by Rahmel is outstanding as well. It’s obvious these two have been working together for some time because they gel like flubber. The best way of describing their sound is Swollen Members, only 20 times more pissed-off. They’ve got some rage to deal with Listen to the tracks like the first single, “Melbosha”. You’ll see what I mean – “Mad Poon” is one of the most gruesomely descriptive narrative raps I care to encounter. This shit ain’t pretty:

“In the near future, man finally destroyed the world
All the bodies of the women and children made your toes curl
Raped, abused and battered, the traumatizing killing
of my mother and father that left my life shattered
They split her from where I first came out
Decapitated her, then they started eating her out
My mom bled, hanging from the ceiling was my dad’s head”

What the fuck? That’s probably what you’re thinking, right? Me too. But that’s what Harpoon Missile wants you to think. That’s their gimmick, and I’ll be goddamned if they don’t make it work. They don’t want their tracks to be smooth rides. This is some tough-ass rap here. On “Another Day”, Harpoon plays the role of a crazed military officer shouting orders at his troops. And while every track on the album is absolutely bananas, this one tops them all. It’s great to listen to, and shit like this will get you into a frenzy in no time if you let it.

“Far Away” is written from the perspective of a prison inmate. No doubt, that’s been done before, but rarely as well as this. Harpoon details his struggle to stay sane, trying to stay focused on his girl or his daughter. The hook is some ethereal voice trying to lure Harpoon into madness. Very haunting shit, and an A+ for creativity too.

So by now you’re thinking Harpoon Missile is a one-trick pony, right? Well like Harpoon says, “Nah nigga, not even slightly.” They’re quite capable of making you laugh as well as making you cringe. Check the hook on “Baby, Baby, Baby”, a track in which Harpoon quests after a girl all night, and finally gets her home only to find she’s a hooker he can’t afford:

“Baby, baby, baby,
Is this true love or are you in it for the money?
Cuz if it’s that, this nigga doesn’t have a penny
I’m broke as fuck, but if it’s love I’ve got plenty
So come on baby tell me”

What’s hilarious is the way he sings the shit. It’s sounds like the worst Led Zeppelin imitation you’ve ever heard – you’ve got to hear it for yourself. But the standout track on the record is easily the second single, “I Try” featuring Melanie Durrant and In Essence. Harpoon Missile switch things the fuck up on this track. They’ve got live guitars on it, and r&b singers, and it’s real laid back. This is the kind of track that you’ll be able to kick back and listen to with your girl (trust me on that). It’s a beautiful tribute by Harpoon to his daughter, Zian, and for fans of the Roots, this track will appeal. Melanie Durrant sounds a lot like Mya, and In Essence is excellent too. Harpoon maintains his edge here, but obviously tones things down quite a bit, given the subject matter. Too bad then that the album’s greatest strength is also it’s biggest misstep. See, while this is the best track on the album, it is also unbelievably out of place. If you can look past that, though, you’ll find that “I Try” is the track that’ll get the most repeated listening.

Long story short, Harpoon Missile make a very strong debut with “Boy, Interrupted”. These cats are from my hometown (Brampton, Ontario, Canada. B-TOWN!), so I’m going to do what I can to support them. Give them a listen, and I believe you will too. Like I said before, they know what they’re doing here â€“ this is not amateurish shit. Keeping it short and sweet (the album’s barely 40 minutes long), Harpoon Missile leave you wanting more. Short on filler, long on breakneck beats and tough rhymes, “Boy, Interrupted” is more than worth your hard-earned dollar. Do what you can to check this shit out.