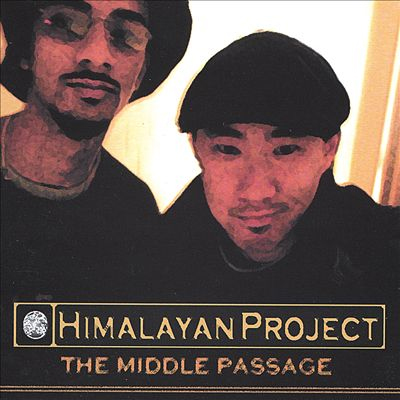 It used be that when hip-hop heads said “Back in the day,” they meant Rakim, Uncle L, and Schooly D. Now with some Gen-Xers actually planning for their retirement, young hip-hoppers consider De La, PE, and Tribe “Back in the day.” Want some vintage vinyl? Go cop 3 Ft. High and Rising. It’s old now.

Seriously, the late 80s – early 90s is often called the second golden age of hip-hop, marked by a focus on lyrical skill (GangStarr, PE, etc.) and experimental beats (Tribe, Black Sheep, etc.). The Himalayan Project, composed of Rainman and Chee Malabar, harks back to this time on “The Middle Passage,” which is both the album’s strength and weakness. On the strength, a few beats are nice and tight, like they might have been pulled out of JayDee’s basement. Peep the simple 4-key xylophone of the intro cut “The Middle Passage,” pulled in with lulls of warm bass. Or “Nuthin’ Nice,” which will recall visions of Baby Phife and Tip playing tag team. Mellow, but upbeat. Good music for… well, for doing whatever you do to relax.

The delivery isn’t too bad, nor are the lyrics, though they have a few roadbumps in their flow. However, they show and prove on a few cuts. Rainman breaks it down on the catchy “Nuthin’ Nice”:

“Fractured your mike on the asphalt
Factoring into any equation relating to beats and rhymes
I speak my mind and climb like Harrier jets
Switching styles, snapping your interior, crushing your ligaments
Rain down the truth, shining bright like filaments
You cats is figments, ig’nant to the fact that we dominant
Like a dark pit over the globe, my opus arose the matrix
I expose their faces”

It’s perfect Sunday morning music, heavy on jazz samples and straightforward rhymes, and could be put on rotation between ATCQ’s “Midnight Marauders” and GangStarr’s “Daily Operation” without one blinking an eye. Well, maybe a little blinking.

The album would be an okay release during the laid-back jazz era that we were speaking on, but now, with the best of that genre released ten years ago, Middle Passage sounds pretty dated. Most of the lyrics are simple, with a theme to only a few songs, and some of the beats drag. They picked a tough style to emulate, though: how can you fuck with Tribe or Gangstarr? I don’t know, either. The potential to shine on their own is there, though. Peep Malabar recalling the wisdom of a homeless man on the acapella “Malabar”:

“‘Shiiieeeeet. Listen,’ I told him as I passed another cold one
‘I gave you a dollar for grub, not for food for thought, scholar
Life’s a bitch, mister’
‘True,’ he replied, ‘and karma’s a twin sista
I spent ten years repenting sins, asking God to forgive
Had three kids, raised none, only praised divine when I could barely live’
He spoke in measured tones, a broken man
discomfort being the only pleasure he had known
‘I am you, you are me, we are one in the same
Wake up, make up your mind
Don’t let the times con you
You got a ride, alright, you got the clothes, but check your mind too
Defeatist attitude like the worlds against you
Life’s a ride, full of highs and lows
so when it gets low, you’re gonna get high on ‘dro?
I know, cuz I did the same and melanin skin life is awfully hard
But trust me, you don’t want to end up sleeping on corners and boulevards'”

Damn. Evidently they have something to say. But by the time the song “Malabar” comes the 35-minute CD is over. Let’s hope that HP finds more of its individual voice the next time around. Imagine a whole CD with their best lyrics, covered with tight jazz beats. I can’t wait, either.