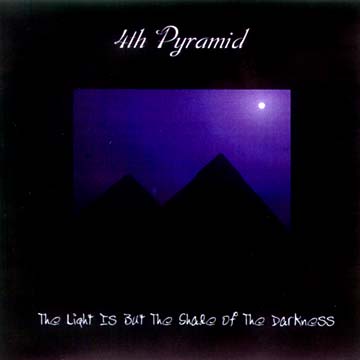 4th Pyramid :: The Light Is But the Shadow of the Darkness

Am I the only one that thinks an instrumental rap album is a bit of an oxymoron? I mean, how can anything really be called a rap album when it doesn’t have any raps on it? Alright, to be fair, I’m not sure if 4th Pyramid even set out to make an “instrumental rap album” here, but that’s what this CD comes across as. Judged on those merits, “The Light…” feels very much like an incomplete package. This is a 16-track affair, spanning more than 45 minutes, and it’s entirely instrumental. The only vocals to be heard come in the form of samples. Is this inherently a bad thing? Not necessarily, no. But honestly, I can only think of a handful of top-caliber producers that could put together a 45-minute display of beats without the aid of someone rocking the mic. It’s just not an easy task. Props to 4th Pyramid for trying, but I think “The Light…” could have used a lot more polish before making its way out of the studio (or, as the case may very well be, out of the PC in some cat’s basement, but I digress).

Things get off to a good start with the first track, “Contemplating Where to Begin.” This would make a great instrumental intro for a rap album proper, and may well be the album’s standout. It opens with an amusing sample: “Hello out there! We’re ready to begin our program!” and continues to evolve into a pseudo-jazz track, complete with snare/cymbal drums and light piano. Listening to the track, however, you will IMMEDIATELY notice how bad the drum programming sounds. I hate to sound like an asshole, but I gotta be honest: this is some of the cheapest, most chintz-sounding drum programming I’ve ever witnessed. I’m 90% sure these drum sounds were pilfered from some free, downloadable piece of shareware. This is an unfortunate situation, because it’s the one constant problem that plagues this entire CD. There are some decent musical ideas on “The Light…” like the live guitar work courtesy of Woodstock on a couple of tracks, the Egyptian influence on “Burial of the Pharaohs,” and the liberal funk samples on ” Wallabee Strut.” But the unbelievably shitty drums just ruin the whole thing for me. This one would have been hot with live drumming â€“ that’s a sound that you just cannot mimic.

4th Pyramid obviously has some strong creative ideas. The track titles alone demonstrate that. “Absurd Concoction,” “Light Through the Fog,” and “Eve of the Renaissance”? Pretty dope sounding, based strictly on names. But sadly, it’s often more interesting to ponder the imagery that the track titles conjure up than to hear the actual tracks.

That’s not to say that I’m going to use my copy of “The Light…” as a coaster, though. It has its strengths. Like I said, there are some fairly cool ideas at work on some of the tracks, and while they do get sort of old at 2+ minutes apiece, they aren’t bad to listen to once or twice. 4th Pyramid has nice taste in samples, so it’s a shame to see some of them go to waste. Like I said, better drums would have bettered things exponentially, and an MC spitting would have been an improvement as well. The production quality is suspect, and the 16-track playlist could easily have been refined. I just really get the impression that something is missing here. Not sure what that something is, but the lack of it definitely makes itself apparent. Maybe 4th Pyramid just half-assed the whole thing, and that’s the problem. Who knows.

“The Light is but the Shade of the Darkness” is interesting enough that it can be tolerated on its first go-round. I would say “enjoyed,” but that may be too strong a word. It’s an album with more than its fair share of problems, and considerably fewer strengths. At the very least, “The Light…” would probably be fun to freestyle to with your boys, if you ever do that in the first place. Ultimately though, it’s pretty disposable. I won’t write 4th Pyramid off though â€“ with some fine-tuning and a decent MC, they could be a force to be reckoned with. Maybe.

4th Pyramid :: The Light Is But the Shadow of the Darkness
3Poor
Music3