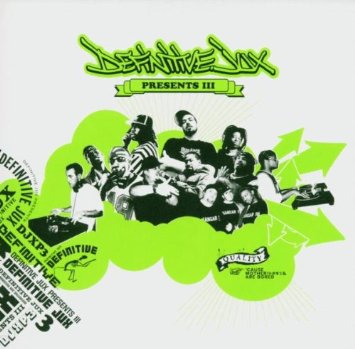 Once upon a time, these pioneers of “next generation” hip-hop music were known simply as Def Jux. Then big money and lawyers got involved, and it was decided that Def Jux was just a little too close in name to Def Jam for their own good. In truth it would be hard to argue this was a coincidence, since on the 30 minute “Def Jux Presents” the label went out of their way to paint their artists as the musical and lyrical alternative to the commercially friendly releases of the once indie label that had been swallowed up by corporate buyouts and mergers. Fronted by El-P, the man who once proclaimed his group Company Flow “independent as fuck,” Def Jux was proud to offer a middle finger to mainstream rap and let experimental beats and rhymes reign supreme. The industry’s middle finger back forced them to change names, but unlike Rick Rubin dropping the “Def” to become American just wouldn’t have the same ring to it. Instead El-P and camp took it the other direction and stretched “Def” out to “Definitive.”

While they may have done it under protest, in hindsight it seems like a brilliant move artistically and strategically. Intended or not, the label has indeed become “Definitive” among the increasingly strong indie rap scene. Their willingness to eschew the expected and forge ahead in new territory has attracted some of the scene’s best and brightest to their fold, and “Definitive Jux Presents III” showcases this talent. It’s truly an amazing arsenal on this release, one which would make any mixtape covering artists from different labels a must buy, but this one is all in-house. Things start out strongly on Aesop Rock’s self-produced “All in All” but it’s when Carnage decides to “Make News” on a NASA produced beat that things really explode. Heavy hits of sonic samples and big bass are reminiscent of “Funcrusher Plus” days past, and Carnage pulls no punches in his feelings about today’s rap:

“A lot of rappers out yappin about – nothin
They copycat styles, flappin they mouth – gummin
The chainsaw wordplay keep the name buzzin
I play in galaxies and work in space shuttles
It’s all over as soon as the game starts soldier
A knife under your grin, fork your dough over
You put to shame with the look-away crossover
by the time you awake from slumber, or cross over
your grave that they usually piss on and walk over
This ain’t a nice guy routine, we talk bolder”

The pace picks up as the Massachusetts all-star combo of Akrobatik and Mr. Lif show up as The Perceptionists for the metaphorical “Medical Aid.” Fakts One provides a perfect boom bap beat, while the two cut up the beats with lyrical threats and attacks on mediocre music, ending strong with the line “Now that the lyrical surgeons got shit sewn, WHO’S TESTIN?” Indeed. Rob Sonic follows up on the rugged self-produced “Dysl3xia,” a track easily passing for any top underground jam from Eastern Conference Records, with a style pleasantly reminiscent of The High & Mighty. Sonic has a penchant for throwing in funny lines you don’t expect: “You’re not a human, you’re a sardine that knows too much.” That’s ill!

The album never ceases to lose momentum – each track leaving you anticipating the musical or lyrical magic to come from the next. The El-P remix of Hangar 18’s “Beatslope” hypes you up for Camu Tao and El-P duet “WMR” that follows. Despot’s brooding electronic “Homesickness” sounds like a mixture of Breezly Brewin and J-Treds on narcotics, like encapsulating “The Fire in Which You Burn” into an audio collage of fascinating madness. Camu Tao moves behind the boards for S.A. Smash’s “Devil in the Hole” and it proves to be lightning in a bottle, combining a simple and effectively pulsing beat with what may be Def Jux’s deadliest. Still the same could be said of Aesop Rock, who produces the MURS track “You’re Dead to Me” and again recaptures the feeling of Company Flow’s early days when they shocked and revolutionized underground rap for Rawkus Records. Not to be outdone, top notch rapper C-Rayz Walz raps over the Arcsin produced “Jello,” a song whose beat seems to be an inspired mixture of 80’s pop synth and the “Clockwork Orange” soundtrack – but it’s Walz himself who proves to be the most inspired:

“The proof was in the pudding neighborhood called her Jello
My man thought she was thorough – poor fellow!
She fucked more niggaz than legal aid in each borough
Favorite color yellow; cheesy racked tendency profound mellow
The role of a serene sister, I miss her
Undercover gossip put her world in a twister
The setting is a sinister slum where sex ain’t sacred
By thirteen she was pro-active and naked
Had a gift to give but she would tend a path not taken
Twenty years old she wishes she was in The Matrix
Years passed mad relationships ain’t last
Her esteem was the small amount of sand in her hourglass
I told her she was beautiful she felt the opposite
Had the pieces to the puzzle couldn’t find a proper fit
Each time we spoke she said, ‘Something gotta give
I’m glad I ain’t got a kid cause I don’t even want to live! ‘”

There’s no doubt that C-Rayz is mining from a deep well of personal pain and tragedy in this song – and the beat both echoes it and confirms it all in one fell swoop. From here to the end of the album there’s no letting up, as one song after another finds inspiration in ways no ordinary rappers or recording artists would. El-P and Cage duet together on “Oxycontin Part 2.” Aesop Rock rocks the DJ Pawl remix of “No Jumper Cables.” Hangar 18 “Takes No Chances” on mediocrity, and by the time you reach RJD2’s funk jam instrumental “Clean Living” at the end it seems like the perfect finale for an album that’s been a wildly intense and entertaining ride of emotions, sounds, styles and words. Truly if there is a more “definitive” compilation of rap’s best and brightest artists in 2004 who refuse to limit themselves in topic matter, flow style, beat choices and emotional range, this reviewer is hard-pressed to think of it. Looking back in years to come this will go down as one of 2004’s definitive albums.