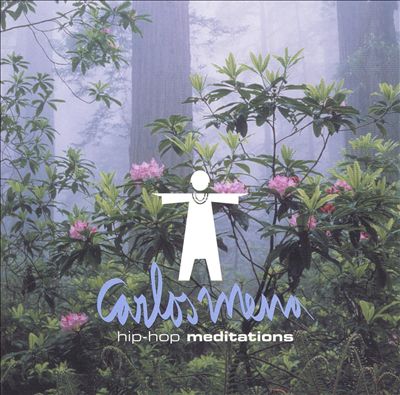 Puerto Rican rap artist Carlos ‘Solrac’ Mena makes it clear from the get-go that he’s putting down some heavy shit. The sixteen-track CD begins with live tribal drums, an old sage wailing, and a sample of an uptight white guy saying: “It is our hope and intention that this recording become a living memory and permanent record of history in the making during our lifetime and an inspiration to future generations.”

Yeah, he’s rather unique. Imagine Common and Wyclef sitting down with a book from occultist Sylvia Browne and a bag of somethin’ somethin’. He doesn’t really care about keeping a single rap flow through a song — he’ll drop it and start singin’ and talkin’ to your ass like an old blues man. About how you and him probably met in a past life. Or how he’s got faith in all people. You’re just sitting in his living room, listening to him speak his mind over some jazz samples and that pretty woman drumming in the corner.

Carlos’s relaxed feel seems deliberate. In fact, “God is You” opens with the sounds of Carlos speaking Spanish and frying something mouth-watering on the stove. You can almost smell the goodness. After a few seconds of marinating, we’re introduced to Mena’s peer AllSeer:

“Dig deep within your spirit, try to find your chizo
Most of yaw spirits is probably about 1000 years old
Life is too short to keep being Mr./Ms. “I’ma”
Cuz next time might not be “Yes, I know, I gotta”
Meditation is the key to life
Spirits travel in groups, so keep working towards the light
Start searchin’ for the god within
Before we find ourselves negotiating for sin
We live our lives concentrating on the wrong thing
Never think about what it means to just dream
We in the Matrix, so accept what we up against
Are you convinced?”

Yeah, he’s deep. However, notice the question “Are you convinced?” at the end of his rhyme. He’s not exactly sure. He wants you to listen and, obviously, he has so much to say, but sometimes he pushes too hard, as if he wants to say EVERYTHING on his mind while he has your attention. This makes the album feel jumpy, like it’s more of a compilation of years of ideas as opposed to one solid thought. For instance, on tracks 6 through 9 — in order — he has you in the b-boy stance with the bouncy “Walking In The Light,” semi-reflective on the “I.T.I.S.I.N.Y.O.U.,” peaceful on “Obatala (Meditation #2 – Rumba Obatala),” and listening to straight coffee-shop poetry on “Nine Haikus.” He wins for originality, but it’s like one thought or tempo isn’t explored enough to actually enjoy it. It kind of defeats the purpose (and title) of the CD: it’s a bit too jumpy to meditate to it.

Carlos wrote and produced the whole album, meaning that there was no barrier between writer and producer, and this is reflected in the album. Being the beginning and the end of a project (though Don Washington helped with mixing) makes it harder to edit yourself.

On the strength however, because of his closeness to the rhymes themselves, most if not all the songs have beats that match the particular topic well. “I.T.I.S.I.Y.O.U.” has a nice organ start, slowing into a even bassline and eventually into a kick-and-drum beat even Norega could spit on. The bonus cut at the album end gives us some live Roots-inspired shit, though Carlos definitely puts his own stamp on it. Another excellent cut is “Sheets of Sound (for Coltrane),” dedicated to jazz great John Coltrane. Even I, a huge Coltrane fan, was impressed with how Carlos broke down the master saxophonist’s music theory (note the lack of punctuation):

“SHEETS OF SOUND!
Sheets of sound
A furious blast of notes grabbed me by the neck and said ‘Listen up,
youngster I’m John Coltrane born in Hamlet, North Carolina September 23,
1926 now SHUT UP AND LISTEN!’
This is how we were introduced a few years ago
I couldn’t understand what he was doing musically
But I could feel the raw power with each flurry of tones he was giving a
piece of his soul to anyone who cared to listen
On videotapes I witness his selfless ways as he gave himself with each solo
Sweat rolled down his cheek in acknowledgement of the pain of giving your soul”

And Carlos continues describing the soul of a complex man as jerks and breaks of Coltrane’s songs jump in to assist him.

Carlos won’t sit comfortably next to your Big Tymers CD. Hell, it might even make “Black on Both Sides” seem easy to understand. However, if you’re tired of a lot of the music today, Carlos may be worth a look. And, as he makes clear in his intro: “The one thing that I do know that I am and always will be, and what you will come to understand by the end of this recording, is that I am hip-hop. I am hip-hop. If I am anything, I am hip-hop.”