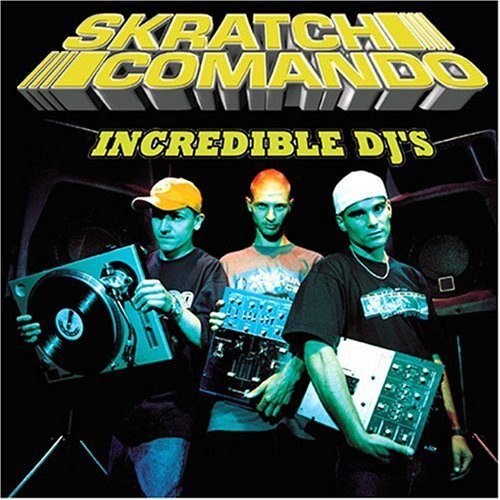 Living in the United States you sometimes find that the best things available are imports; from rum like Bacardi to cars like Mercedes-Benz and even TV shows like “Iron Chef.” A small list of great imports – and now you can add Skratch Comando to it. What, you got a problem with the list?

At last, a DJ crew with some original flavor! With all the wikki-wikki and zigga-zigga being produced by DJs from the states, most Hip Hoppers are pretty much in the dark as to how far and wide two turntables and a mixer has gone across the globe. Hailing out of La Porta (Barcelona) Spain, Skratch Comando introduces you to DJing as they feel it; Spanish style.

Incredible DJ’s is the cultural contribution from DJ None, DJ Marc and DJ Tillo. While this marks their first US release, they have compiled a very impressive sound. This album isn’t a massive vinyl manipulation broken up by stupid ass skits, horrible collaborations, or unnecessary commentary. You get their bread and butter all out ish that working on all levels from start to finish. Not limiting themselves to the MPC and Technics, they employ the sounds of live drums, shakers, and trumpets on a few tracks (a method not new to the Hip Hop DJ, but one that is often overlooked in the production stage). Skratch Comando is a Spanish group yes, but ninety percent of their vocal samples are in English. Making sure they represent properly they dropped three cuts done entirely in Spanish: “Vamos Fuerte/Go Ahead”, “Este Es El Sonida Que Viene/This is the New Sound”, and “La Vida No Es Sueno/Life Is Not A Dream.” If you haven’t heard someone rhyming in something other than broken English, you should enjoy the syncopation performed by Eddy Dame & Male, Zemo, and Tremendo Menda.

By the time you finish “La Vida No Es Un Sueno (Life is Not a Dream)” you’ve heard the reason you should have paid more attention if you took Spanish in high school. When Tremendo starts speaking, you immediately find yourself putting your chin on your chest while the Tony Montana voiced MC bounces over a thunderous war chant bass line and mild shakers thrown in just to tease your neck hair. Production skills further illustrate that Skratch Comando is a high caliber vintage import.

DJing requires originality, versatility and deviation, creativity – et cetera, et cetera. Honestly, anyone can be a DJ. Being able to separate yourself from the masses is the key. Skratch Comando digs in and pulls out the best of their turntable manipulation skills. They even toot their own horns in a funky manner. Working mock intros fully equip with crowd cheers and announcers allows for each DJ to play a bit before perfected selections. Take note: NY and Cali DJ’s don’t have the market sewn up; likewise other spots (in this case La Porta, Spain) doesn’t automatically yield better than. Skratch Comando adds a few more grooves to the DJing element and raises the flag for Spanish Hip Hop.