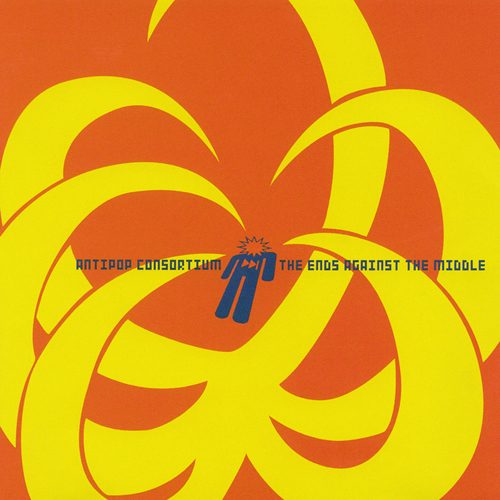 Anti-Pop Consortium :: The Ends Against the Middle EP

With only seven new tracks on this EP, this is a suitably short review to match. If you know the name Anti-Pop Consortium then you already know their steez:

“All my people in the populous
Let you arms swing like an octopus
M Sayyid.. drafting shit to drop on you
like an F-350 dual-rear wheel pick-up
Plus I get dough without a gat;
Just my finger in your back, like it’s a stick-up
In a hollow, don’t even swallow
I’m going start clapping like the Apollo
So what I’m saying is I’m clever; put the words together
95 degrees in the breeze and minus 6 over the baring sea with no sweater
I’ll always keep you falling apart like leather
Vendetta ran since ’79; coins in a sock swinging at your spine from your behind
You pulled out a nine and I turned into a green light and ran over your mind”

These cats really do not play by the rules. Tracks range from between 1:30 to 4 minutes, beats switch from ominous bass to cranky organs mid-track, the three MCs drop lyrics all over the place like poetry teachers on crack. A few of the tracks (“Dystopian Disco Force” and “Pit”) are purely instrumental, but even then it’s hardly your average boom-bap. More like a sampled pendulum slowing and speeding up with bleeps scattered like cut grass. The rappers never really cease to amaze me. Each has a different style with M. Sayyid probably dropping the most convoluted poetry (see above). His use of language is fantastic. When talking about physical risk he never explicitly mentions it, rather just gives a weapon and a method; heavy coins in a sock and a sharp blow to the spine.

Ok, ok, so it’s not all good news. If you have heard their music before and didn’t like it then, I assure you, you will not undergo any sudden conversion after listening to this EP “Vector” and “Perpendiculr” are neither particularly interesting. By all means be strange but make it funky as well. Please? I don’t really like EP releases in general, but especially one like this with only four tracks containing rapping. Having purchased this release hasn’t really changed any of my perceptions. I still think they are a truly inventive group. I still think a lot of people will not like them. Accusations of pretension have been thrown at APC, but, in their defence, I feel they are just doing what they do best. Three abstract poets + one genius behind the boards = dope music. Once again the fusion of beats and rhymes is a beauty to behold. They go together well; with enough difference to be separate but enough common-ground, in terms of style, to blend together. Imagine the two most weirdly talented and cool people you know, getting married; it’s like that (sort of).

“Do not flatter me;
I’ll blow you to the wall like an art gallery
Deep; like submarine tragedy
Non-stop hits, like that bunny with the battery”

If you are a confirmed fan then it’s probably worth seeking out this release. If you feel like hearing APC for the first time them may I recommend “Arrhythmia.” If you always thought they were crap then please don’t let this record distract you from the P Diddy release currently spinning on your stereo. After a day listening to dull mainstream radio or a friend’s choice of music hearing APC is like a cold draught of water mixed with battery acid. It might be painful or odd in parts but it beats the hell out of the homogenous, lukewarm and dilute shit I was offered earlier.