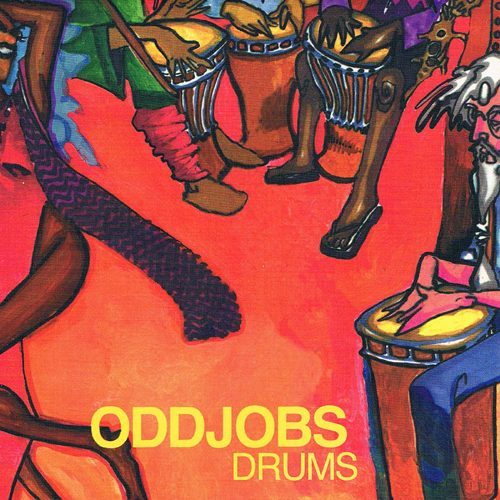 Trying to make a living with music certainly isn’t the oddest job around. But making music rarely provides you with a steady income. That’s why musicians are prone to have odd jobs, second jobs that allow them to pursue their music career. The younger ones might additionally strive for some higher education. It’s this everyday life enviroment that brings forth a group like Oddjobs.

Emerging in 1996 out of the Minnesota-based Cases of Mistaken Identiy crew, the group featured Minneapolis MC’s Advizer and Crescent Moon and St. Paul DJ’s Anatomy and Deetalx. Also coming out of the CMI camp, rapper Nomi completed the Oddjobs line-up a few years later. As they became part of the Minneapolis scene governed by the Rhymesayers crew (Eyedea & Abilities, Atmosphere), Oddjobs released their first full-length in 1999, titled “Conflict and Compromise”. Yet when Advizer and Deetalx went to New York to attend college, working together became increasingly difficult, although that period did produce the acclaimed “Absorbing Playtime” EP. In order not to lose their ‘band’ feeling, the rest of the quintet relocated to New York as well. “Drums” is the product of their stay in the Big Apple.

Proving that they work hard for their money, Oddjobs released the excellent “Blue Collar Holler” 12-inch earlier this year, followed up with “Dry Bones” featuring a remix with Aesop Rock, Vast Aire (of Cannibal Ox) and Kimani (of Masterminds) and should now be present in a record store near you with the eclectic “Drums”. Here’s what you can expect from it: After a short live segment, “Time Flies” gets things started, Oddjobs clearly celebrating their reunion as they chant:

How’s that for a clear and concise mission statement. Although they introduced themselves properly at the end of “Blue Collar Holler”, telling the three rappers apart can be difficult. They all have a similar, relaxed approach to rapping. As their rhymes flow at the same, steady pace and the voices become interchangeable, you realize that these guys share more than just a flat in Brooklyn. A past, for instance. And a present. That’s why they’re ready to tell the “tale of two cities” (Twin Cities) as well as the “fable of five burroughs” (NYC). So don’t think Crescent Moon, Nomi and Advizer are some guys who just rap. Wordplay and unusual wordings definitely have their place in their rhymes. Such as “I spent a good portion of life arguing Resurrection versus the Extinction Agenda,” which uses Common Sense and Organized Konfusion album titles to construct an amusing ambiguity. On other occasions, the lyrics are a tad bit too desultory. The fact that “Scary Mary Revisited” is some sort of sequel to a song that was on a debut album that probably didn’t get around much doesn’t help.

But that’s a minor complaint about an album as diverse as “Drums”. “Blue Collar Holler” jumps at you with that “get up, get involved” vibe and a catchy chorus that is sure to attract an audience that frequents live gigs, while “Dry Bones” will be a feast for those who like to gnaw away at everything that’s not easy to stomach. Thus, “Drums” is a balancing act between body and spirit. There’s the skeletal funk of “Hit ‘Em With a High” or the battle-ready “The Backstroke”, and there’s “Dream for Molle”, a trilogy where the producers seize the opportunity to outshine the rappers. While you’ll be trying to figure out its meaning, its slowly blossoming beauty will have you forgetting about meaning, double meaning and hidden messages, the message of the music is that straightforward.

Because the raps usually play a much more promiment role than on “Dream for Molle”, the rest of “Drums” isn’t as readily digestable as the title suggests. “Drums” is more than just beats and rhythmic word cadences. “Wolves in Wool”, “Shore”, “Naked City” and “Murder Plot Twist” require all attentive listening – but in any of these cases it’s well worth it.