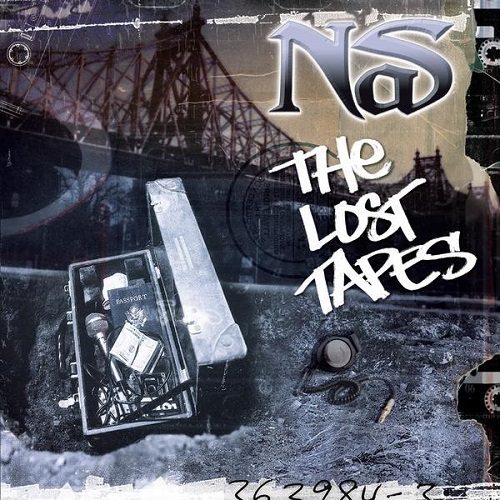 Imagine if a street vendor offered you a tape of all the best Nas joints from bootleg tapes (often floating the net as MP3’s) and New York mixtapes (like “No Idea’s Original”). Now imagine that it has no DJ Clue shoutouts, no skits, no freestyle filler from twenty herb thugs you never heard of. “No cameos, no hype, no bullshit.” That’s the slogan for Nas’ new LP “The Lost Tapes,” an album which compiles a lot of classics with almost no filler.

In fact due to a lack of fraudulent material, this album actually clocks in at a relatively short 43 minutes. The 12 tracks (11 and one bonus) that make up this time though are among the best work Nas’ has done. It’s hard to even fathom why these previously recorded songs weren’t officially released before now. At his best Nas is not just a great flowing rapper with smooth vocal tones, he’s also a gifted and occasionally controversial lyricist. Both of those aspects find pen to paper like stylus to vinyl on the song “Purple”:

“I don’t like the way P. Diddy did Shyne with different lawyers
Why it’s mentioned in my rhymes? Fuck it, it’s just an intro
Hate it or love it, like it bump it or dump it
Writing, across the stomach spell GOD son
[…]
Think of how many dudes died tryin to be down with you
Everybody’s under six feet of ground but you
Still standin, still roamin through the streets, that’s real
You a survivor, knowin all the beef is ill
You got a bunch of thugs witchu even now that’s ready
Trustin your judgment, quick to put it down, they deadly
The hood love you but behind your back they pray for the day
A bullet hit your heart and ambulances take you away”

If you’ve been checking for the underground tracks from Nas for a while now, you’ll know a lot of these songs already. “Blaze a 50”, “Drunk By Myself”, “Poppa Was a Player” and the bonus cut “Fetus” are all from the infamous “I Am Nas” recording sessions that were scrapped due to heavy bootlegging. Even if you have copies of these tracks, the ones on this CD are cleaned up and digitally mastered – changing rough cut gems that were valuable to begin with to gleaming diamonds. And speaking of diamonds, beat maestro Alchemist produces two stellar tracks: “My Way” and the Primo-esque “No Idea’s Original”:

“No idea’s original, there’s nothin new under the sun
It’s never what you do, but how it’s done
What you base your happiness around material, women, and large paper
That means you inferior, not major
[…]
If niggaz could look inside my mind, you’ll find
where bodies are buried, first look past the hotties who dimes
Go to the center, enter with caution, past the braincell graveyard
where weed’s responsible for memory loss
Let’s witness, the horrific, the stench’ll make you nauseous
See what I seen every day I live with this torture
Lightin spliffs up to stay high like 24 hours
Sleep with my heat, wash with my gun in the shower
My tongue is power, it thrills women, kills demons
Long as I’m still breathin I’m still winnin, I’ll teach ’em”

Irony is fairly obvious – despite the song’s title, Nas has been one of rap’s most original artists for a decade running. There have been ups and downs in that time, and the recent EP “The Remixes” was one of those low points, but if the best of that EP (in an uncensored form) had been combined with this stellar disc, the overall package would be comparable to “Illmatic.” As it stands now, this album is far from the typical quality of “rediscovered and unreleased” material that most musicians put out between studio albums. Such CD’s are often infamous for having one great song (usually from a soundtrack) and a lot of weak joints, but not this time. From L.E.S. to Precision to even Deric ‘D-Dot’ Angelettie, all the music is quality, and Nas spits the purest verbals. No cameos, no hype, no bullshit. In this case it’s not just an advertising campaign, it’s true (it’s DAMN true). “The Lost Tapes” is for the Nas fans, but even the haters will have to respect this one.