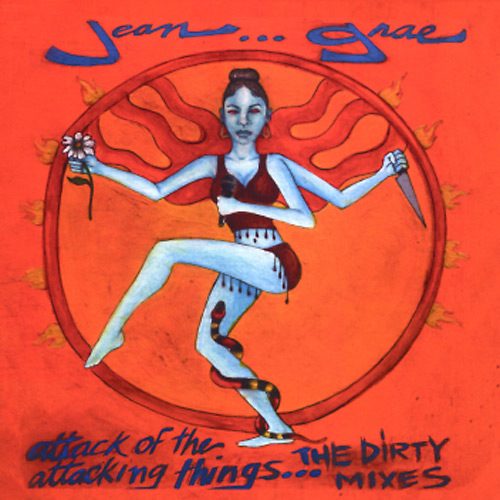 Attack of the Attacking Things

If you love underground hip-hop, if you love female MC’s who talk about more than their tits and the ice on their wrists, if you love classics like “Negro League Baseball,” then you’re already familiar with Jean Grae. Some of you may know her better as What What, but she’s changed her name and stepped up her game to release the full length album “Attack of the Attacking Things.” Those who don’t know her yet, here’s an invitation.

“So stagnant; niggaz, get off your block and travel
Stop actin like your flesh is metal and your hood’s a magnet
We need to globalize, further spread on this earth
to appreciate the full value of individual worth
To realize how ridiculous the thought of ownership is
and protectin your turf – that’s bullshit man” – “Block Party”

If the name sounds familiar even though you’ve never heard her raps, you probably know the similarly named Jean Grey of the X-Men comics and recent motion picture (where portrayed by Famke Janssen). Though she is known there for her telepathic and telekinetic abilities, the rap Jean Grae wields an amazing power of her own – the ability to use words that cut like knives. Her flow is similar to Bahamadia, but where the BB Queen often uses a whisper to be loud the plain spokean Jean prefers to be loud and reduce inferior MC’s to a whisper. More than that, Jean Grae’s flow makes her a feminine version of Guru – a delivery that at first seems monotone but actually hides subtleties of inflection and emphasis that increase her rap’s power.

“I spit like the kids on the little bus – non-stop
Skill more disturbing than the thought of your ex
having sex with one of your parents (eww!)
All on top like the flip missionary mission
Beatch! I’m straight trippin like niggaz done killed my cousin
Been slept on, passed-over like in the Jewish tradition
Cast in cameos like I’m dressed in hand-me-downs
A step-sister, an afterthought, niggaz are shook, it’s alright
Cause I +WILL+ smack you in the mouth, I’m Jean Grae” – “Thank Ya!”

As you can see, Jean is a versatile MC who can flip from talking about social issues to jaw-dropping punchlines that have you hitting rewind and saying, “Oh shit! No she didn’t!” Yes, she did. That alone would make a full-length album from Jean Grae one of the most pleasant surprises of 2002, but good news only gets better. Jean has enlisted an all-star production team to provide her fat beats, including Mr. Len, Masta Ace, Evil Dee and Nasain Nahmeen. Okay, maybe you haven’t heard of the latter beat maestro, but you’ll no doubt remember his name after hearing songs like “No Doubt” featuring Block McCloud, “Thank Ya!” or the layered jazz of “Get It.” Speaking of the latter:

“They still want chicks with tits and ass out
My respect is worth more than your advance cash out
Fuckin you right in the ear; if these chicks did it
you’d be catchin gonorrhea – the only thing I spread is tinitus
Right? Just tryin to keep this shit right
And for all of y’all askin when that joint droppin;
watch me this year”

Describing Jean Grae, quoting Jean Grae, even worshipping Jean Grae from a distance really doesn’t do her justice. It’s safe to say this much though: with 12 tracks, 3 of which are skits, there’s just not enough material to go around. After forty-three minutes of Jean, you’re left feeling refreshed but at the same time still hungry for more. In the murky world of female MC’s she offers brilliant clarity; in the tired world of misogynistic raps and bra straps she offers the empowered speech of someone who doesn’t need to be sexual to achieve her liberation. Jean Grae most of all is a rapper’s rapper – the kind who can belittle inferior competitors and spit dope phrases that amaze at the SAME TIME as she drops knowledge. Man or woman, MC’s of Jean’s caliber come along only once in a decade. While many hailed “The Miseducation of Lauryn Hill” as the intellectual and lyrically sharp female rap album, this album does what Lauryn didn’t do – stick to the rapping from start to finish. Is it a superior album? To the true hip-hop fan, it just may be. I don’t know how long “Attack of the Attacking Things” will be in stores, but I got lucky and copped this one at Best Buy. If you see it, don’t pass it up.